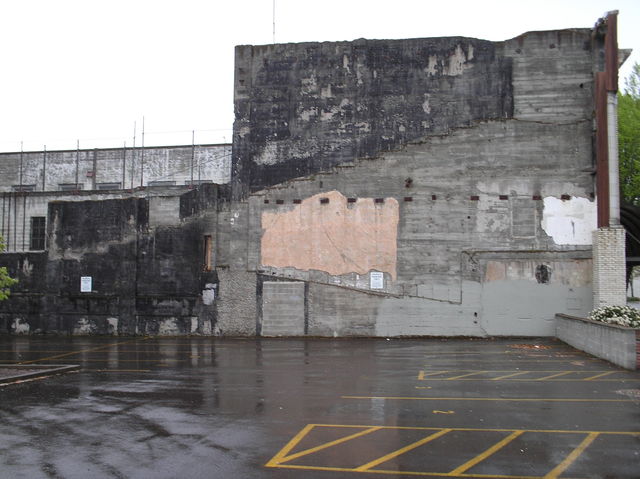 Frank Bligh took out a $250,000 loan to build the Capitol Theatre, but was unable to make payments and it was taken over by Warner Bros Circuit Management Corp. and was opened on Tuesday October 5, 1926. The Capitol Theatre closed on October 4, 1990 and was later demolished

Here is a 1925 photo from the Oregon Historical Society:
View link

I saw and photographed what remains of the Capitol week-before-last. A beautiful theatre was sacrificed for a handful of parking spaces. The facade could have been retained without losing any parking, but it made way for a row of pathetic little bushes.

The stagehouse remains, with the proscenium opening closed-off by cement blocks. One sidewall of the auditorium still mostly stands—bare concrete with some fragments of textured decorative plaster and the stepped outline of the balcony risers. One Corinthian column in white-glazed terra cotta stands as the sole remainder of the theatre facade proper. To the right of this, an ornamental doorway surmounted by a niche containing an urn now serves as a storage place for dumpsters. Originally, this passage lead from the balcony fire escape out to the street. The office and retail portion of the Capitol building remains intact and functioning, and continues all around the corner to the facade of the separate Elsinore Theatre. The Capitol’s still-standing stagehouse backs up to one end of the Elsinore’s stagehouse.

Ah, I fondly remember the Capitol at the place “not quite as good as the Elsinore.” I saw Star Wars, Raiders, Platoon, The Mission, etc. at the Elsinore. What I remember most from the Capitol was “Gremlins.” Still, sad to see it’s now gone.

Interior picture. This may have been posted previously, but many previous links are dead.

Act III took on the theatre downgrading it to sub-run, discount status. It closed with Back to the Future III and Total Recall on October 4, 1990