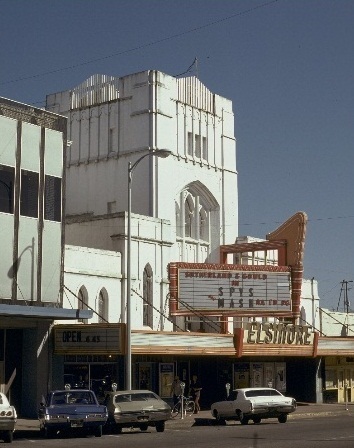 The Elsinore Theatre, which opened on May 28, 1926, is famous for its wondrous Gothic style architecture. By 1941 it was operated by Warner Bros. Circuit Management Corp.

Listed on the National Register of Historic Places in 1994. Renovation work on the theatre was completed in 2005.

Classic movies are presented on Wednesday evenings, and if the movie is a silent classic, then it is accompanied on the mighty Wurlitzer, 3 manual 26 rank, theatre organ.

The principal architect of Salem’s Elsinore Theatre was Ellis F. Lawrence, with associate Fred S. Allyn, both of the firm of Lawrence and Holford. Lawrence was later to become the founding dean of the University of Oregon School of Architecture.

What a beautifully unique theatre, inside and out. I am so glad it has been restored and is in use.

Such fond memories of this place! I recall standing in line during the first week of Star Wars and paying the “special” price of $2.50, a buck more than usual, to get in. Many great films there when I was a teen: Quest for Fire, Raiders, Platoon, The Mission. In the early 1980s it was the best place to take a special date because it was big, clean, and “fancy,” especially compared to the crappy Moyer theaters in the malls. I always wanted to sit in the loges but the balcony wasn’t bad. I’m delighted to see it’s been restored and will look forward to visiting sometime in the future when I make it back to Oregon again.

I haven’t been in Salem for decades, however I seem to remember a theater across the street from the Elsinore called the Grand. It was being used for wrestling matches at the time. (1960s). I don’t find it listed on this site. Anyone have any info?

I’ve been a fan of the theater organ for many years, but had been out-of-touch with that community for some 10 years when I decided late one night in early 2003 to sniff around the Internet a bit and see what I could find about organs still alive… It so happens I found this theater, at the time 25 miles south of where I lived… A couple weeks later, I was there, watching a silent film and listening to “live pipes” for the first time in a good while!

I saw the “before/after” of the major renovation that took place in the summer of 2003… Before, it was in decent shape, but not so great… After, the place is marvelous!

The Theatre Historical Society last visit there was July 17th, 2001.