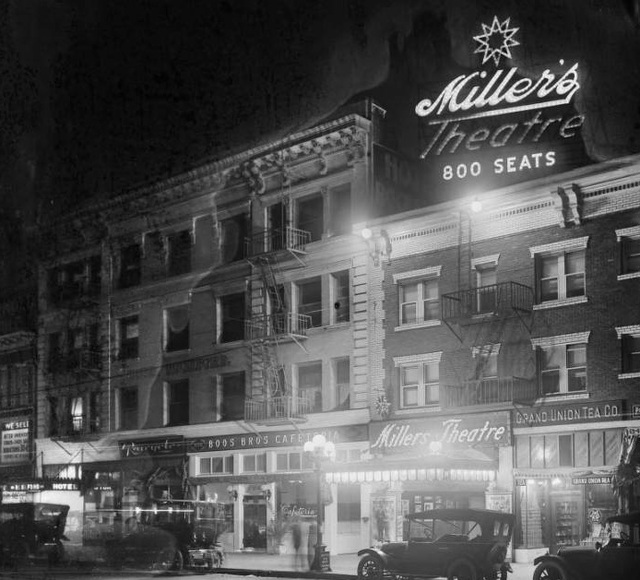 There has been interminable discussion about adding this theatre, so I’m putting an end to it. Miller’s Theatre advertised on March 27, 1914 as being at the junction of S. Main Street, S. Spring Street, and E. Ninth Street. “Always six reels of the best first-run pictures in town shown on that wonderful plate-glass mirror screen”. The Miller’s Theatre opened on November 9, 1913.

The ‘Roosevelt’ name was then transfered to the former Electric Theatre at 212 N. Main Street which had been shuttered since 1947.

From the city directory.

I had my doubts if there were ever three theaters on S. Main between 8th and 9th, which would have been the case if you had Miller’s at 842, Triangle at 832 and California at 810. Presumably Triangle refers to the intersection where Main, Spring and 9th meet in that geometric arrangement.

If Fred Miller retired after selling this house to Loew’s, he didn’t stay retired for long. He built the Figueroa Theatre in 1925, and was connected in some way with the Carthay Circle between 1926 and 1929 (see my comment of May 28, 2007 on the Alhambra Theatre page.)

With regard to Miller’s 1924 deal with Loew’s, note that the January 10, 1925 Screen News flyer for the California and Miller’s Theatres that silentfilm linked to on June 12, 2008, above, names Fox West Coast Theatres as the operator of the theaters.

The ca.1917 photo (panel two of a three-photo panorama) I linked to in the comment at the top of this page has been moved. For now it’s right here. I’m thinking that, if the theater had more than 500 seats, then there must have been a long lobby under the hotel, and the auditorium was probably at right angles to it, behind the hotel. Look at this photo, which is the third panel in the panorama. There’s no way that 500+ seats could have been squeezed into the ground floor of the hotel itself, what with the need for columns to support the floors above. The back building (with all the mushroom vents on the roof) looks to have been at least 50' by 100' and could have accommodated that many seats.

You can see the California Theatre also in the picture on the left side behind the cleaners sign.

Two events are announced by three Spanish-language theaters-the California, Mason and Roosevelt, for the next several weeks. Starting tomorrow the first showing in America of the beautiful Adriana Lamar in “Memorias de una Vampiresa” is scheduled.

I have a California/Miller’s Theater combo program at the Silent Film Still Archive.

Miller’s Theatre was expanded in 1916, according to an item in the October 21 issue of Southwest Contractor & Manufacturer. Construction was to begin immediately on an addition 28x60 feet. There would be anew stage, and seating capacity was to be increased by 210. A sprinkler system was to be installed throughout the theater, and the entire house would be redecorated. The project was being carried out by the Milwaukee Building Company.

The 1939 photo linked by tkpepper on November 19, 2008 is now at this link. It shows only a sliver of the theater, but ROOSEV can be seen on the marquee. I’m still looking for a photo that would show the house with its earlier aka of Triangle Theatre.

Mary Mallory has used to recent controversy over the movie The Interview as an occasion to recall the hounding of the 1921 German film The Cabinet of Dr. Caligari from the screens of Los Angeles. Her tale of near-riot at Miller’s Theatre, and of the American movie industry’s fear of competition from German films, can be read on this page at Larry Harnisch’s web site, The Daily Mirror.