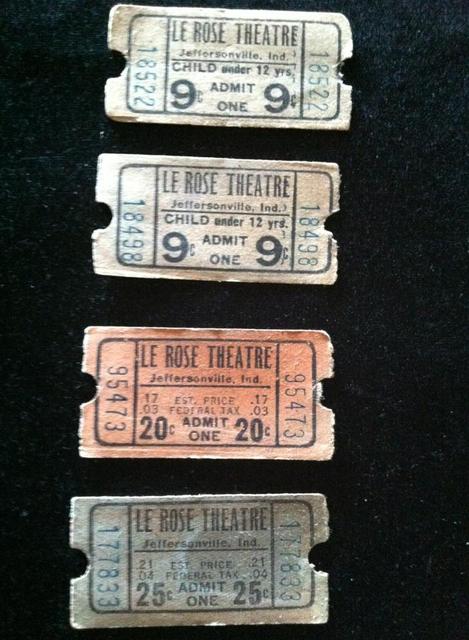 The LeRose Theatre is listed in the 1941 Film Daily Yearbook. It has a glazed brick front with brownish tones. and the facade still has the remnants of the marquee supports.

The building has been changed on the inside and is now used as office space and warehouse space. While it is not used as a theatre, it is taken care of and used on a daily basis.

Sorry about the misspelling in my submission. Glad to see so much talk about it though.

ken mc the pic you have in your post up top also has a pic of the older Dream, do you have the rest of that to post on the Dreams profile. It would be cool if so. i have just added the dream to the Ct registry.

Looks like the name of this theater became detached over the years. The awning over the building entrance now reads “Le Rose” but I think the name was meant to be LeRose, without the gap. The name on the marquee in the old photos has no letter-sized gap in the name, though the cursive script of the two parts is not directly connected. The name of the house usually appears as LeRose in Boxoffice Magazine, and an Internet search reveals that people with the surname LeRose usually use the gap-less form.

The June 5, 1937, issue of Boxoffice ran an item datelined Jeffersonville which said: “John F. Gilooly has completely remodeled the LeRose Theatre here, which has been closed since the floods, and has reopened the house. Complete reseating was included in the job.” Gilooly was then the manager for Switlow Amusements, operator of both theaters in Jeffersonville.

John F. Gilooly Was also a member of the coast guard life saving station #10, louisville post, he was one of the most famous members. there is a bronze placard on the station which is a National Historic landmark dedicated to him. The Station is the dock boat For the Steamer Belle Of Louisville. interesting little tie in, I thought.

Jeffersonville Indiana, by Garry J. Nokes, says that the Le Rose Theatre was built in 1920. If the claim is correct, the item that appeared in the July 5, 1919, issue of The American Contractor was probably about the Le Rose:

The Le Rose is more than 90' deep, though, and has considerably more than 800 seats, and the entrance building is two stories, not one. It’s possible that Mr. Switlow decided to build it bigger, or it might have been expanded later.

There are photos on the Internet of a few buildings designed by J. J. Gaffney, and the facade of the Le Rose does appear to be characteristic of his style (he seems to have been very fond of red and orange toned face brick set off with stone or cast stone trim.) But given the difference between the project described in the journal item and the Le Rose as it was built, maybe we should only put down James J. Gaffney as the possible architect of the Le Rose. Maybe someone with access to other sources can use this information as a starting point for further research.

Here is a 1928 photo of the auditorium of the Le Rose Theatre. It looks to me as though it might have had a section of stadium seating at the back. It was a very handsome interior, although the clerestory windows must have precluded movie matinees, unless there was some way of blacking them out.

“Theater” spelling should be changed to “Theatre”, based on an image of vintage tickets I posted. Image courtesy of Leslie Logsdon via Facebook.