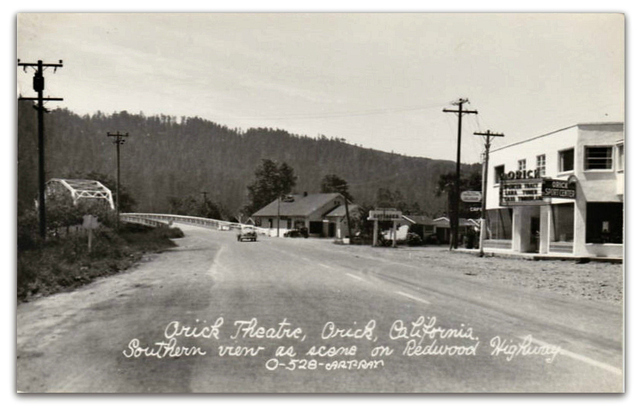 That’s what I thought. Thanks.

In 1997, I was delighted to get a tour of the closed Orick Theatre from then 80-something-year-old Bob McNamara, who built the theatre. Here is the information he gave me:

Broke ground: June 6, 1947.
Opened: New Year’s Day 1948.
Apartments in same building were not finished by that time.
The theatre was last used fulltime commercially in the late Sixties, and sporadically for special events for several years after that.

At the time of my tour (1997), building was for sale. At the time Orick’s population was 650.
Mr. MacNamara gave me five old tickets which were still in the theatre: One for 30-cents, one for 90-cents, and three for 65-cents.
I took photos of the theatre inside and out, including a photo of Bob MacNamara and his son outside the theatre. The art deco chandeliers still lit up, as did the curtain lights, but the curtain motor was broken. He didn’t fire up the projectors, but he did turn on the slide projector, which still had a slide advertising a local merchant in it. A record was still on the turntable in the booth which was playable over the theatre’s sound system.

On the exterior beneath the storefront windows were sections of glass block which were lit from behind with neon. Mr. MacNamara disconnected them after a flood in the Sixties. These features are no longer visible today, as I stopped by the Orick this past Spring.

The bottom portion of the box office was, and still is, stored in the lobby.

Errata:
The spelling, according to my notes at the time, of the owner/builder’s last name is McNamara. My apologies for spelling it “MacNamara” during the rest of my above post. Just goes to show one can’t proofread too many times!

This theater is currently for sale.
View link