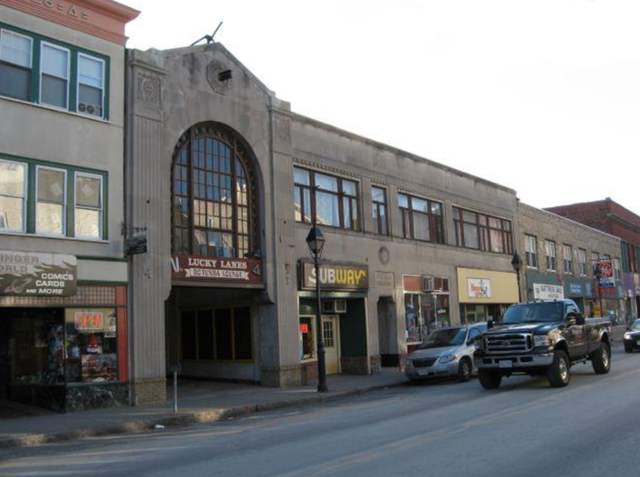 Opened on November 12, 1930 with Charles ‘Buddy’ Rogers in “Follow Thru”. The York Theatre was originally built and owned by Abraham Garbose and planned by architect Albert J. Smith, but for reasons unknown it was completed to the plans of architect William G. Upham.

The York Theatre operated continuously as a theatre until closing sometime in the 1960’s, along with Athol’s other theatre the Capitol Theatre. After the York Theatre closed it became became a temporary courthouse, a dance studio, and then a teen center. Most recently it housed a candlepin bowling alley and a bar/lounge located in the lobby portion of the theatre, this closed in 2012. The York Theatre still stands vacant today as a reminder of Athol’s past, the theatre is intact and still retains many of its original architectural features and lighting fixtures.

In the 1927 Film Daily Yearbook there are no less than 3 movie venues listed under Athol MA: the Lyric Theatre with 800 seats, the Opera House with 1100 seats, and the YMCA Auditorium with 250 seats. (in the 1897-98 Julius Cahn Official Theatrical Guide, the Athol Opera House is listed with 800 seats, so perhaps it was the Lyric which had 1100). All of these must have been considered obsolete, so that’s why the York was opened.

The Theatre Historical Society of America has some info about Athol theaters compiled by long-time member the late Brother Andrew Corsini. He wrote that the York Theatre was opened on Sept. 12, 1930, designed by Albert J. Smith, with 1200 seats. There was also a Capitol Th. in Athol, designed by Mowl & Rand, and opened in Feb. 1930 with 1225 seats. The Lyric Theatre was originally the Academy of Music,had 750 seats and was open from 1907 to 1933. The Athol Opera House, later the Athol Theatre, had 676 seats and was open from 1897 to 1929.

The website now shows the building as no longer available. Hopefully it means it has been sold. The page describes the building as 20,900 square feet, with the auditorium, its balcony and the italianate decor intact. The building includes a bar which is currently operating. a town-owned 200 car parking lot is immediately behind the building.

Just got the following note from a friend of mine in MA: “I was at Michael’s class reunion on Saturday. It was at the old York theatre in Athol, MA. They are remodeling it and have made part of it a candlepin bowling alley and another part a bar/lounge. The rest is the gutted theatre. They said it is registered as a historical theatre. This was their first special event and the grand opening was the following day. The have done a great job with the remodeling to date. For instance they took 3-4 months to designing the bar. The curve of the bar matches the circular pattern in the original ceilings and they found fixtures in old storage rooms and cleaned them up and installed them.”

I am hoping to find more info on this.

The Theatre Historical Society archive in Illinois has the MGM Theatre Report for the York. Says it’s on Main Street, in Fair condition, and showing MGM product for 10 years. There were 825 orchestra seats and 370 balcony seats, total: 1,195 seats. There is an exterior photo dated April 1941.