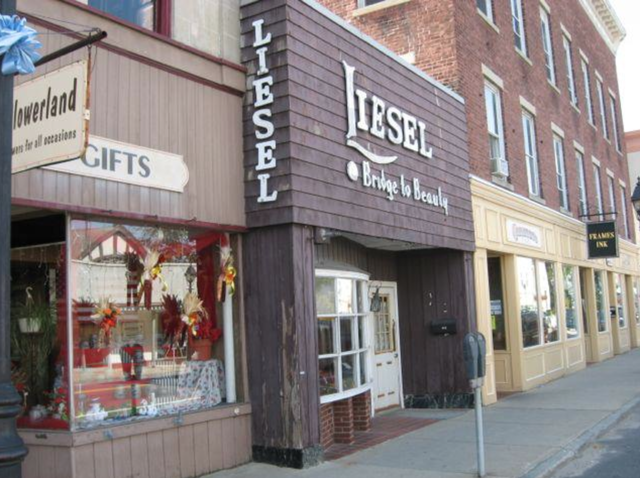 The Capitol Theatre in Athol opened on February 6, 1930, 7 months prior to the towns other theatre, the York Theatre. It was designed by Roger G. Rand of the firm of Mowll and Rand. I have heard that the entrance and lobby are extant today.

I know almost nothing about this theater, so any additional information is welcomed.

Someone recently told me that the Capitol in Athol had an Atmospheric or semi-Atmospheric auditorium, and that the lobby still exists as a commercial structure of some kind. Does anyone know what the street address was in Athol?

OK, someone at Cinema Treasures has added the street address! Does anyone know to what use the lobby is put these days?

A beauty salon, known as Leisel Bridge to Beauty Inc. operates from this address. Whether its out of the theatres lobby, or an adjacent store in the building, I am not sure.

Thanks, Ken. Most of what I know about the Capitol in Athol came from the late Bro. Andrew Fowler of the THSA. He lived in Illinois and Indiana and liked to travel around and do theater research in local towns. Somehow he ended up in Athol one day. In addition to theaters, he also liked Broadway musicals, trains and trolleys. He was a really nice guy, always willing to share his info. Last week, “Someone Who Was There” told me that he had heard that the Capitol was an “Atmospheric” and that the lobby was still standing.

The Capitol Theater was built by the Goldstein Brothers and was a Colonial Atmospheric theater similar to the Greenfield Garden Theater (also built by the Goldstein Brothers). The theater opened in 1930 (a year after the Garden) and according to the Athol newspapers was much more elaborate then the Greenfield Garden. (They also stated the residents of Greenfield would be jealous of the Capitol.) This theater was a smaller non-identical sister theater to the Garden. The auditorium had the twinkling stars, cloud machines, the recreation of a new England Town on the walls, etc.. However I do not know if the town was a giant mural, similar to the Garden’s, or miniature buildings actually constructed; several articles in the Athol papers, at the time of the opening, state that a Water wheel was constructed in the auditorium. The lobby and Foyer of the Capitol was quite different from the Garden. While the Garden’s lobby & foyer were designed to look like an old new England parlor, the Capitol’s were designed to look like the interior of a covered bridge. The facade to the Capitol was quite different from the Garden. The facade was UNIQUE, very difficult to describe (imagine something similar to the Westwood Crests facade only much smaller and done over in a Colonial style). However the Capitol’s marquee and vertical sign are almost Identical to the Garden’s.

PS: Here is a link to the Garden Theater’s Cinema Treasure page: http://cinematreasures.org/theaters/1213

The Theatre Historical Society archive in IL has the MGM Theatre Report for the Capitol. Says it’s on Main St., built in 1930, in Good condition, and showing MGM product for 10 years. There were 799 orchestra seats and 381 balcony seats, total: 1,180. There is an exterior photo taken in April 1941 which shows a very unusual facade, with the Olympia restaurant to the right.

The current issue of Marquee Magazine, quarterly journal of the Theatre Historical Society, has a feature article “The Movie Palaces of Athol, Massachusetts” by CT member Jonathan A. Boschen. Several photos are included. It covers the Capitol and the York theaters.