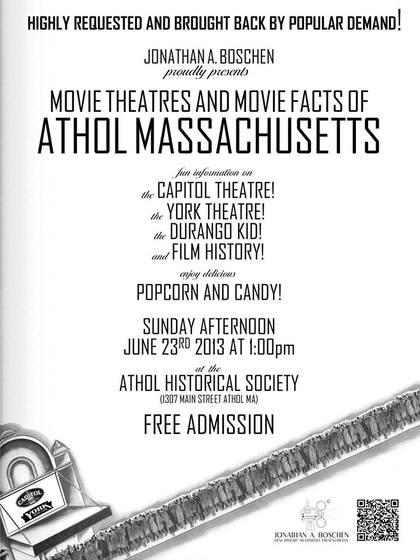 ATHOL, MA — Throughout the twentieth century, significantly during the first half, movie theaters have played a vital role in both American society and culture. These buildings of public assembly, many of which were ornately designed, brought communities across the nation a wide variety of entertainment, public service, and inspiration.

The town of Athol Massachusetts had two theaters that did just that. The York Theatre and the Capitol Theatre both opened in the year 1930, and during their thirty-year legacy provided patrons with a luxurious atmosphere to enjoy a wide array of entertainment.

On Sunday June the 23rd at 1:00pm the Athol Historical Society will host a second exhibition of film history enthusiast Jonathan A. Boschen’s well-received presentation on the York and Capitol. The presentation, which utilizes a slide show, explores these buildings during their reign as theaters throughout the 1930’s, through the 1950’s and discusses how they are significant and important to Athol’s history.

One of the highlights of the presentation is the historic photographs from the 1930’s, that have been digitally scanned at a high resolution. This will allow viewers of the presentation to clearly see the ornate architectural details of both theaters up close, and help them understand how these two buildings brought entertainment and joy to the town. Along with the photographs, background information on the buildings’ architects and owners, as well as other significant pieces of film history and Americana that relate to going to the movies in Athol are shown.

Admission to the presentation is free and complimentary freshly popped popcorn and candy will be served. Parking is available at the Historical Society and along Main Street.