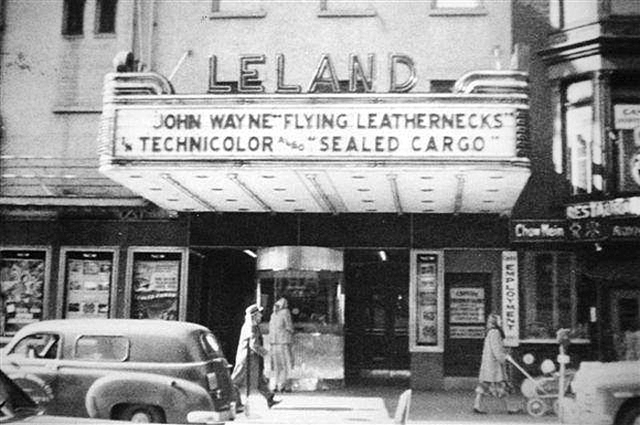 Replacing an earlier theatre destroyed by fire, the Trimble Opera House was opened December 31, 1869. In 1873 it was renamed Leland Opera House and was one of Pearl Street’s many theatres. In 1884 it was taken over by F.F. Proctor. The Opera House was converted for vaudeville/movies in 1906 and was renamed the Leland Theatre. Proctor sold the theatre in 1914. It remained a popular theater in Albany until March 6, 1949 when it was seriously damaged by a fire. It was later restored and continued as a theatre playing risque productions until it closed on April 8, 1965. It was demolished thereafter. Pictures I’ve seen of the fire damage show a double-balcony house, with the balconies supported by pillars.

By the ‘50s the Leland had become home to exploitation and borderline artsy skin flicks, along with the occasional racy European import that our local Catholic diocese told us we were forbidden to see.

ALBANY-Bernard “Barney” Vane, 59, who had served for 24 years as a projectionist at the Leland, died Saturday at his home. He lived in Albany for 46 years.

Albany Chronicles, a book published in 1906, has a few entries about the early history of this theater. The first theater on this site opened on May 18, 1825. Originally called simply The Theatre, it was converted into an Episcopal church in 1840, and then returned to theatrical use as the Academy of Music in 1863.

In 1868 the original building was destroyed by fire, leaving only the front wall standing. The theater was rebuilt, opening as the Trimble Opera House on December 31, 1869. This was the building that became the Leland Theatre.

By 1910, it was called the Leland Theatre, though it was still being operated by Frederick Proctor at least as late as December, 1921, when Proctor’s Leland Theatre was mentioned in Variety.

Another interesting thing about the Trimble Opera House I came across is that it was named for theater architect John Trimble, though he did not design it. It was designed by his former student, Thomas R. Jackson.