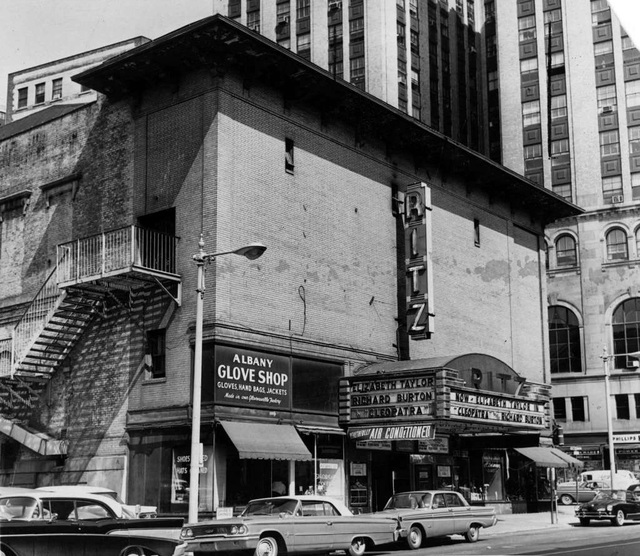 The former jail house for the City of Albany was changed into the Ritz Theater in the 1920’s. By 1941 it was operated by Warner Bros. Circuit Management Corp.

One of Pearl Street’s many theaters, the Ritz Theatre was a popular house through the 1950’s. It was a casualty of television, and was demolished on October 15, 1964. The building stood where the current Times Union Center (Civic Center) is currently located.

Thr Ritz was equipped for 70mm. I don’t know when it closed but when “Camelot” opened in 70mm at the Madison in December, 1967 the equipment was taken out of storage and reinstalled. There were 2 Philips DP70’s with Ashcraft Super Cinex lamps. The Altec Service guy who did the installation told me that the Ritz had a modified RCA magnetic sound system. When they moved the equipment the documentation for the RCA system had been lost so they bought a brand new Ampex solid state system.
I visited the Madison during the “Camelot run and the two projectors were labeled #3&#4. I asked the projectionist about this and he told me that the Ritz had FOUR projectors. Machines 1&2 were Simplex XL and Ashcraft C70 lamps.
Bob Throop

A less technical comment. I remember my Sunday School teacher taking us to the Ritz to see the “King of Kings” in 1962. If I remember correctly, it only cost $0.50.

The Ritz showed all the biblical epic films. It was a little classier than the nearby Strand.

This is from Boxoffice magazine, May 1943:

ALBANY-Ralph Porter has been appointed assistant manager of Warner Bros.‘ Ritz, which Jules Curley manages. Porter was discharged from the army for physical disability. James Malone, former Ritz assistant manager, is a Marine and recently visited here on furlough.

My Mother Esther Tateo sang on this stage when she was 3 yrs. old. She always talked about the theater that she loved

While a student at the Albany College of Pharmacy I saw as a double bill, “Dr No” and “The Manchurian Candidate”. I’d never heard of James Bond. What a great discovery. This theater seemed past it’s prime but still very,very classy. Ray , Charlotte NC

My father was a projectionist at the Ritz. It closed after a fire of unknown origin in probably the early 6o’s. 70 mm Machines did go to the Madison, where my father later worked after a stint at Hellman’s and the Delaware. He was quite saddened when the big screen at the Ritz was folded as the building was closed making it unusable. I spent many afternoon with my father in the booth and he would let me start the generator and load the carbon arc rod into the projectors. Learned how to rewind the reels and both my brother and I learned to thread the projectors and to watch for the dots in the upper right of the screen indicating the need to step on the changeover.

Unlike today with the ads before movies, the Ritz had a record player and each of the projectionist would bring records from home to play to the waiting audience

He hated to go to movies at the multiplex after his retirement because of the small screen size. Ritz was in the 3,000 seat range, I think the Madison was in the 1200 range and the Delaware in the 800 seat range. I remember as a kid I was admonished not to go to the Palace, maybe because it wasn’t Warner’s