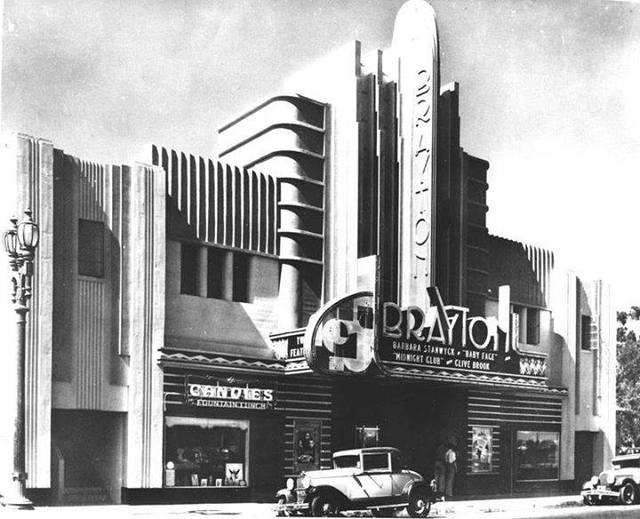 The Brayton Theatre opened on July 25, 1925 with House Peters in “Head Winds”. It was equipped with a Marr & Colton 2 manual 8 ranks organ. After it closed in 1950 it became a church. By 1950 it was operated by Cabart Theaters Corp.

It reopened in 1966 showing serials etc on Saturday & Sunday mornings as part of the ‘War on Poverty’ as a Teen Post, reaching acting skills to youngsters in the neighborhood. It went over to double feature revival programs. It closed for good on February 25, 1971 with Lee Marvin in “Monte Walsh” & James Stewart in “Cheyenne Social Club”.

It was later torn down to make way for a Filipino church.

In January 1967, the Long Beach Independent reported that a teen theater troupe would use the Brayton for performances:

The Magnolia Theater has completed ts subscription series and does not plan to resume activities until fall; The New Theater, a Teen Post operation of the Office of Economic Opportunities, has opened in the old Brayton Theater on Atlantic.

My mother took me to the Brayton Theater in the late 1940’s( around 1947 or 1948) We lived a half a block away from it. My recollection is it may have closed as early as 1949. For years it sat vacant. Then in 1966 it opened as a Teen Post. My mother was assistant director there serving under Bob Hunt who was the director. During the summers of 1966 and 1967, I hung out there. One staff member who I only knew as “Brownie” sold pills from there. It was, however, by then in terrible shape. I recall seeing old man Brayton coming by in the summer of 1966 to look things over. The demolition date given above is not correct. I recall that taking place in the earliest during 1975 and at the latest by 1977. As far as the church goes, at first it was African-American, then, by the late 1990’s, Hispanic and only by the turn of the century did it become Phillipino. During the last two years everything on the eastside of Atlantic Avenue from 20th Street to Hill Street was demolished to make way for some units.

I see that Jacob already posted the links in July 2008, so thanks to him for the program.

Hello everyone. My grandfather Jack owned this theater before the big earthquake. It was destroyed afterwards and as my dad got older he decided to run it. He ended up selling the property after it went out of business. The thing just wouldnt make enough money. He was born in 1944, so when he was 26, The year would have been 1970. If anyone would like to know more about the theater, i could ask my dad.

I’m currently going through several Long Beach newspapers that are on microfilm. The period I have access to covers 1938-1977. I found the “newly opened” Brayton Theatre advertising from approximately Aug 6, 1969 through approximately Sep 16, 1969. At that period of time they were charging adults 99 cents and kids 49 cents. During this short run, they went from family friendly double features to adult only double features and apparently closed down for awhile. Found more advertising running from November 13, 1970 through mid February 1971. Any seat, any time 49 cents, mostly family friendly double features and kid shows on Saturdays that included 10 cartoons. Will post again if I find anything further.

Since my last post, Oct 6, 2014, I have perused Long Beach newspapers on microfilm through June of 1973. The last advertisement I found for the Brayton Theatre was Tuesday February 16, 1971. Double feature of “Sand Pebbles” and “The Undefeated.” Ad indicated theatre opens M-S 6:30 Sunday 12:30. Since most theatres changed their programs on Wednesday, I presume this would have been the last day of operation for the Brayton. 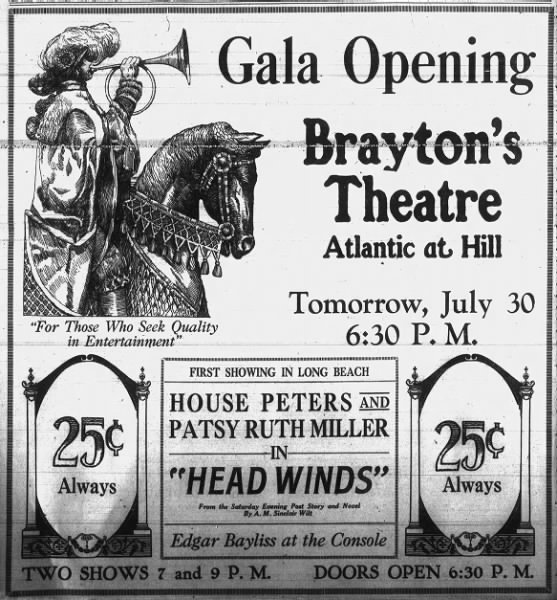 William H. and George F. Brayton launched the Brayton Theatre on July 29, 1925. They added sound to stay current. After shutting down in 1950 for films, the Brayton - then owned by Milton Arthur as part of the Cabart Theatre Circuit - was used as a church and a lodge. But the Brayton made an improbable movie comeback thanks to the community in 1966. The Brayton appears to have finished its run as an ultra-discount double-feature house where all double-features cost just 49 cents a ticket. It appears to have ceased operations on February 25, 1971 with Lee Marvin in “Monte Walsh” playing with Jimmy Stewart in “Cheyenne Social Club”.