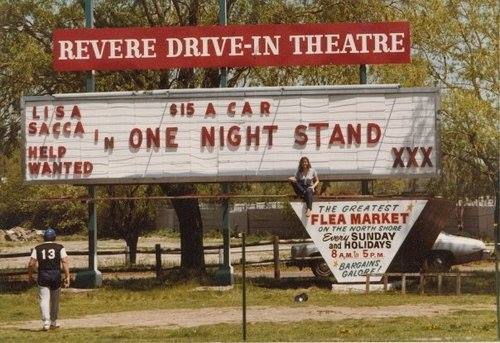 The Revere Drive-In on Squire Road was opened August 25, 1948 with George Brent in “Out of the Blue” & Gary Cooper in “The Westerner”. In 1955 it was listed as being operated by Michael Redstone & Daytz Theatre Enterprises. I remember driving in my father’s car (1974) on Route 60 in Revere and you could see the movies from the road. A few year later, my grandma and I would pack up her 1963 Buick and head out to the flea market at 4:30 in the morning.

That is incorrect – the aerial picture from 1955 clearly shows the only location,at the junction of routes 1,C-1 and 60.

If you go north up route 1 on the picture, you can see an areal shot of the Saugus Drive in.

While investigating something about the drive-in, I came here, and thought I would point out a couple things from historicarials.com that are mentioned above.

There WAS a drive-in that straddled the line between Revere and East Boston, but I believe it was called the Suffolk Downs Drive-In, and was located across Bennington Street from the race track on what is now the Belle Isle Marsh Reservation. It was built after 1955 (maybe 1957), and it appears the screen still existed in 1971 but gone by 1978. No sign of it existed by 1995. This would have co-existed with the Revere Drive-In, so it would not have shared a name with it.

However, if you look at the aerials from 1955 of the Revere Drive-In, and then look at across Squire Rd., you’ll see the outline that appears as if it was a drive-in that has been abandoned. Could this have been the “previous” Revere Drive-In, that was abandoned in favor of the larger one across the street?

Here are 2 better photos of me and my parents at the Flea Market at the Revere Drive In Theater in 1972 and 1974.

The Revere Drive-In has a Facebook page, link below.

I think I do remember the drive in being moved. Never attended it but I remember being driven by it on the highway. The newer location had its screen so it was right in front of you as you hit a curve. Wonder how many accidents it caused.