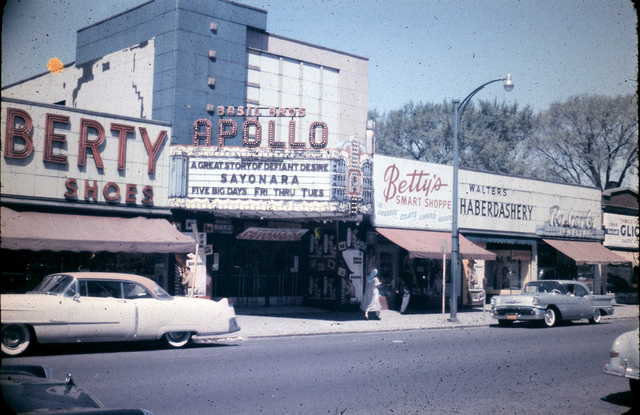 The Apollo Theatre first opened in 1941 by the Basil Bros., and might have been the last cinema built in Buffalo until after World War II. Situated in a busy commercial district, the Apollo Theatre prospered until being severely damaged in a fire in 1966.

After many years of unsuccessful attempts to restore the theatre, ownership of the property fell into the hands of the City of Buffalo, which has now converted it into the Apollo Media Center, with TV production and broadcasting facilities.

Here is some additional information about the current occupant:
http://tinyurl.com/yqycwz

Here is an excerpted July 2002 article from the Buffalo News about the opening of the Media Center:

Jul. 27—Public access television took a big step forward Friday with the opening of new three-camera studio at the newly named Apollo Media Center. The center, formerly called the Buffalo Municipal Telecommunications Center, hosts the studios for the three public access channels on Adelphia cable in the city — Channel 20 for the general public, Channel 21 for educational institutions, and Channel 22 for government.

The expanded center at 1346 Jefferson Ave. includes a new three-camera studio, with a new master control center and digital studio equipment. “This really increases the quality of production people can do,” said Tom Tarapacki, director of telecommunication at the center. “This is a great access for people. It’s just like the professional studios here in Buffalo.”

The Apollo Media Center is a $3 million project created in 1998 to transform the 18,000-square-foot building from a movie theater into a television studio. “I remember sneaking into the Apollo Theater when I was young,” said Buffalo Common Council President James Pitts, who toured the facility Friday. “But this was a place where people could dream. They used to come here dreaming of being an actor or actress. People came here dreaming of artistic pursuits. And I think it can still be that.

“We want this to become one of the most complete centers for communication. I don’t know of any center that has the technology we have here. This truly is one of the jewels of the city.”

As a kid in the mid to late 1950’s, I lived near this theater and directly behind the theater was a street and my school. I got to see the back end of the Apollo on a daily basis. I used to rummage through the Apollo’s trash on garbage day and found lobby cards, posters, spliced film, tickets, etc. besides the normal trash. Unfortunately when I moved in 1959 my mother threw away all of my collection. Thanks mom!!!

This theater was patronized by me because it was very close to my house and mostly showed science fiction and horror movies, which were my overall favorites. From what I remember, the theater lobby was very small and the interior was long and narrow. It was a great neighborhood hangout, especially on weekends.

Blaxploitation films and martial arts films were what I remember about this theater. Located deep in the ghetto, almost the corner of Jefferson and E. Utica.

Looks very art deco and what is the most interesting about lower end neighborhood theatres. A cultural image of American pastimes.

ChrisB’s photo with a clickable link. The marquee certainly has an Art Deco look, but that facade above it is pure Midcentury Modern. The auditorium looks more Streamline Modern. The Midcentury touch isn’t surprising, as the house was designed by Michael DeAngelis, who was usually ahead of most other theater architects in his willingness to experiment with new styles.