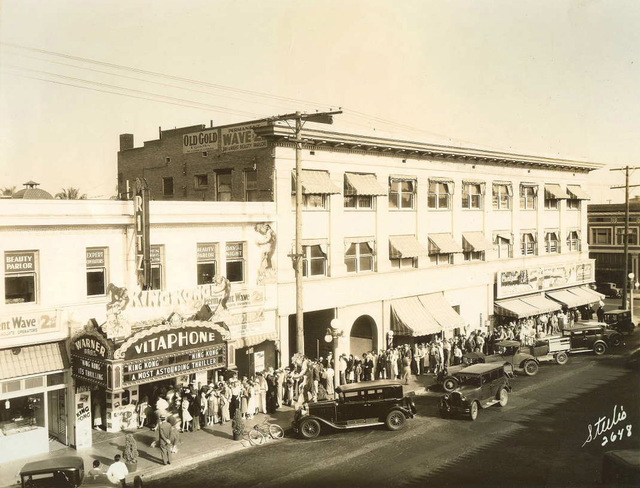 The Auditorium Theatre was opened on May 16, 1910. Following a refresh, it reopened as the Strand Theatre on March 8, 1917. In 1930 it was remodelled in an Art Deco style, reopening March 6, 1930. By 1941 the Ritz Theatre was operated by Warner Bros. Circuit Management Corp. It was taken over by Stanley-Warner on June 19, 1963. It was showing adult films in January 1975 as the Pussycat Theatre.

Here is a September 1973 ad from the LA Times:
http://tinyurl.com/y9esnrh

Whatever happened to the building, there’s a cinema (chain?) at this address now.

I used to go to the Bugs Bunney club at the Ritz on Satursday.

This would be the same block that now hold the Empire 20, which is currently closed.

E.H. Dowell opened here as the Auditorium Theater on May 16, 1910 with motion pictures. Dowell was also manager of the La Petite and Star theatre in the Nickelodeon, show-store era. This theatre was an advance with an orchestra and multiple projectors. Carl Ray took on the venue and it was converted after a $10,000 refresh to the Strand Theatre on March 8, 1917. It converted to sound and changed names to the Ritz theatre on March 6, 1930. It became an adult theater just after Christmas of 1968. It closed in 1991 under the operation as a Pussycat Adult Theatre and was demolished.