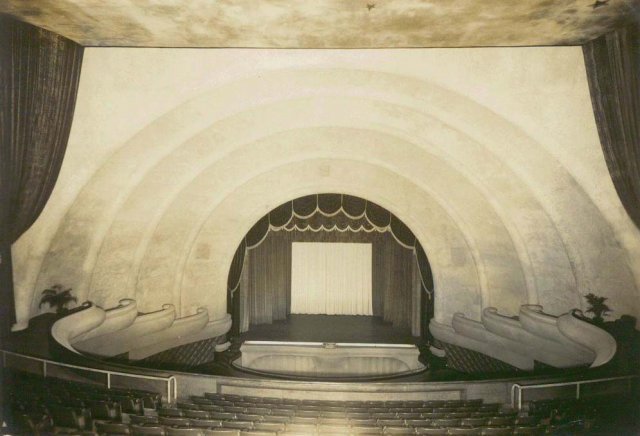 Opened on 29th March 1941, the architects were Fernando Martinez Campos and Pascual de Rojas. It is built within the Edificio Rodriguez Vazquez which is an 11 storey high building, containing ground floor businesses, 64 apartments and includes another pre-existing theatre;the Casa de la Musica located next door.

The America although run down is till a beautiful auditorium. Inside it is a smaller version of Radio City Music Hall, with its vaulted ceilings and side boxes. It is now used as a live performance theater. I used to attend my school’s graduations each year at the America theater in the mid 50’s and also attended many movie shows, most notable Forbidden Planet, Sayonara, etc. the Live performances with great stars of that era were a few years before my time. In the late fifties they only showed films. I visited there after 37 years absence and they showed me around the auditorium. It was kind of dark so I could not see details but from looking at the foyer and public areas it is obvious it needs quite a lot of attention.

This theater is located at Galiano #253 between Concordia and Neptuno in downtown Havana, it is erroneously positioned on the street map in El Cerro. I remember it was one of the first movie theaters, if not the first, with air conditioning in Havana, they kept their doors to the lobby open and you felt the cool air when you walked by it. I saw “Baby Doll” with Karl Malden there and “A Face in the Crowd” with Andy Griffith.

Can anyone tell me the source of these magnificent contemporary photos of the Teatro America (circa 1941)?