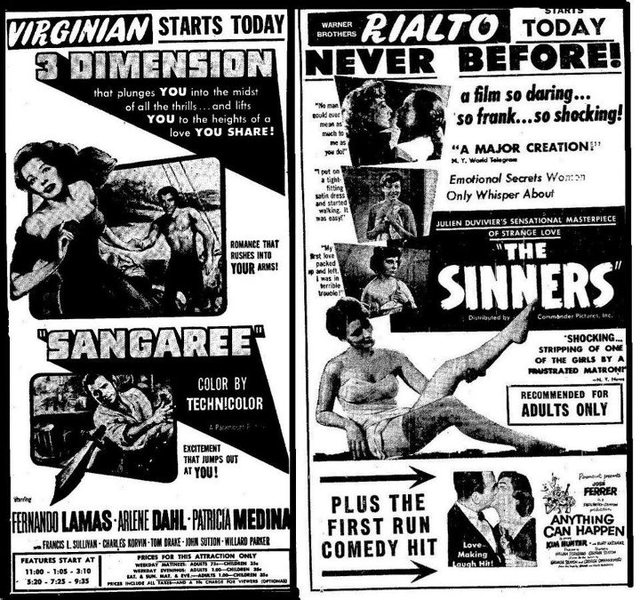 This web page devoted to Quarrier Street starts with a photo of the block the Rialto was on. The theater’s vertical sign is prominent, but I see no marquee. I am having a hard time figuring how the theater fit into this rather dense block.

The caption under the photo says that the Rialto was built in 1917, and says that the auditorium was entered from the side, with the orchestra floor and screen to the left and a stadium style “balcony” to the right. Given the location of the theater entrance and the configuration of the building the entrance was in, I just can’t see how a 783-seat theater was shoehorned into the space.

On our Kearse Theatre page I found this comment about the Rialto, posted by kencmcintyre on November 16, 2006. Perhaps the Rialto had not yet been added to the CT database at that time, but the comment has a long quote from some publication (Ken didn’t cite a source, but it was probably one of Charleston’s local newspapers) which belongs here, and since Ken isn’t around anymore I’ll post it:

“The last film at the Rialto was ‘13 Ghosts.’ But the 43-year-old theater in the Morrison Building on Quarrier Street is not one of them. After a shutdown of four days, the Rialto will reopen tomorrow with ‘The Apartment,’ the picture being shifted from the Virginian, also a unit of Stanley Warner Corp.

“Newspaper ads last week announced that the Rialto would be closed last Sunday night, ending the four-decade life of the theater. John Cox, the Rialto’s manager, was transferred to the Warner Fairmont theater. William Wyatt, manager of the Virginian, was ordered by the Pittsburgh region office to take over the closing of the Rialto.

“Last Monday, Wyatt moved dozens of large cartons into the theater for packing of the seats. A filing case was removed from the Rialto office to the Virginian. ‘All I can say now is that the lease for the Rialto has been renewed with the Stanley Warner Corp.’ said John Morrison, an owner of the Morrison building. He declined to discuss prospective remodeling of the building, which at its birth in 1917 was the pride of Charleston for its elegance.”

I grew up in Charleston, WV and remember going to this theatre in the 1970s. The Rialto closed sometime in the 1960s and was re-opened as the Midtown Theatre (actually the Owens Midtown, the same owner as the Owens Drive In Theatre) early 70s. The theatre never had a marquee at all – only the verical sign attached to the Morrison Building that read “Rialto” and later “Midtown”. The theatre is actually a part of the Morrison Building, an office building on Quarrier Street in downtown Charleston.

To get to the theatre, you would walk through the lobby of the Morrison Building, past its elevators, to a non-discript theatre entrance. Inside was a small concession area. Beyond the concession area was the one entrance to the theatre’s large auditorium that was arranged 90-degrees to the entry.

That entrance opened into what was actually a wide aisle that bisected the theatre perpendicular to the screen. At the end of the wide aisle was an emergency exit.

The section to the right of the wide entry aisle was elevated about 8 feet above the main aisle. There were two ramped aisles that allowed patrons access to the seating in the upper half of the theatre. The projection booth was at the back of this upper section.

It was stadium seating before stadium seating was a thing. By having the entire rear half of the seating elevated this high, patrons could enter and exit the theatre during the movie without blocking anyone’s view of the screen.

Believe it or not, all 783-seats fit into that space. The theatre auditorium was huge. You would never know from the street.