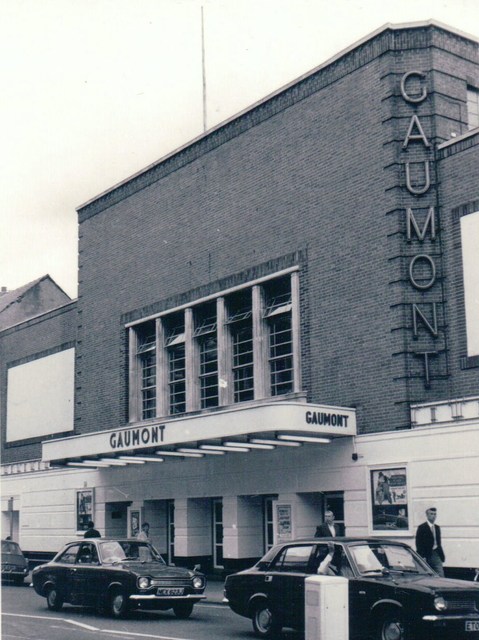 The Gaumont Theatre opened on 28th October 1935. It was built by Provincial Cinematograph Theatres(PCT) who were a subsidiary of the Gaumont British Theatres chain.

The exterior was designed in a modern Georgian style carried out in brick and had a set of five large windows in the centre that admitted light into the 100-seat restaurant, located over the wide entrance foyer. The auditorium had an Art Deco style with seating arranged in a semi-stadium style, with a raised section at the rear. The proscenium was 50feet wide and 28feet high and the cinema was equipped with a fully equipped stage that was 70feet wide and 40feet deep. There was a Compton 3Manual/10Ranks theatre organ which had an illuminated console.

In the late-1950’s & into the 1960’s it hosted many concerts on its stage, including: March 11, 1958 Buddy Holly & The Crickets. Other pop star followed, such as Gene Vincent, Eddie Cochran, Bo Diddley, Brenda Lee and Bobby Vee. In 1963 The Beatles appeared on two occasions, one of them supported by Roy Orbison. In October and December 1963 The Rolling Stones. On 2nd April 1967 The Walker Brothers topped the bill in a concert that had supporting acts Jimi Hendrix, Cat Stevens & Englebert Humperdinck. In 1973 David Bowie did a concert as Ziggy Stardust. Rod Stewart appeared solo as well as fronting The Faces. The Seekers and Gary Glitter also performed and Cliff Richard took to the stage at the Gaumont on three separate occasions. In November 1973 Moot The Hoople (from Hereford) topped the bill, with Queen as supporting group.

The Rank Organisation closed the Gaumont on 4th May 1974 and it was converted into a Top Rank Bingo Club. By 1990 it was operated by Zetters then Corals. Later operating as a Gala Bingo Club and from June 2018 it was renamed Buzz Bingo Club. It was closed on 21st March 2020 due to the Covid-19 Pandemic. It was announced on 15th July 2020 that the closure would be permanent.