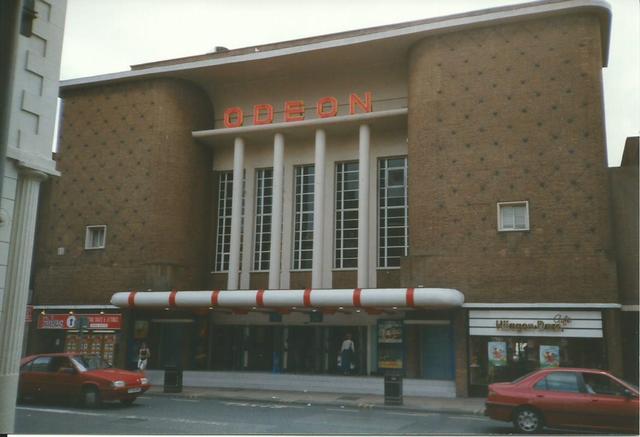 Built on the site of the Empire Theatre/Silver Cinema (1835-1939). It had been purchased and operated by Oscar Deutsch’s Odeon Theatres Ltd. in 1935 and was closed in March 1939, to be immediately demolished. (It has its own page on Cinema Treasures).

The shell of the Odeon was completed when World War II broke out in September 1939, and the building was requisitioned by the Government for use as a storage facility. In June 1948, it was derequisitioned and handed back to Odeon Theatres Ltd.

Work began fitting out the building, but times had changed and the original concept designs by Harry Bullivant were altered to a much simpler style, eliminating cove lighting etc.

The Odeon opened on 2nd January 1950 with Valerie Hobson in "The Rocking Horse Winner". Anthony Asquith, the noted film director (but not of this film) made a personal appearance and organist Stanley Tudor played a Hammond organ that had been especially fitted for the occasion.

The exterior in brick, had a central window, behind a pediment which had the Odeon name on top. Inside the auditorium, seating was provided for 1,688; 938 in the stalls and 750 in the circle. The walls were plain and there were four light fittings for illumination and decoration.

The Odeon was converted into a triple screen cinema from 3rd March 1974 when it re-opened with 720 seats in the former circle screen 1, and two screens located in the rear stalls, each seating 103. The re-opening films were "Don’t Look Now", Jesus Christ-Superstar" and "Sleuth". The Rank Organisation closed the Gaumont across the road in the same week the Odeon triple-screen opened.

A set of vintage photographs of the Odeon, taken in 1950 at it’s opening:
http://www.mawgrim.co.uk/cavalcade/worcester.htm