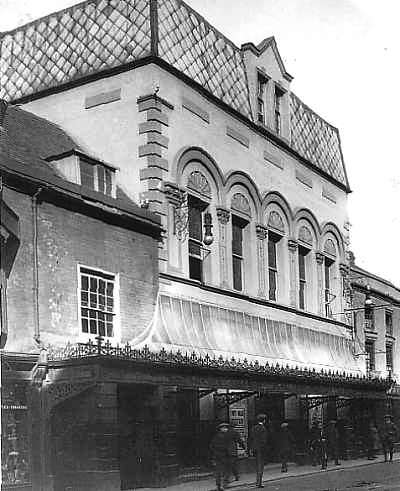 Located in the town centre. Originally on this site stood the Kings Head Theatre. The Theatre Royal was built in 1875, but burnt down in 1877. It was rebuilt to the plans of noted theatre architect C.J. Phipps, and reopened in 1878. Alterations were made in 1903, when improvements were made to the dressing rooms and scenery store. It was around this time that films began to be screened as part of the programme.

In 1910, a projection box was built at the rear the stage, and the theatre became the Theatre Royal and Palace of Varieties. In February 1912, a fire destroyed the stage, but it was soon rebuilt. Films continued as part of the variety programme until around 1915. After then newsreel films were screened. The Theatre Royal then programmed variety & dramatic plays. From 1937 it hosted repertory and variety.

The Theatre Royal was closed on 28th May 1955. It lay derelict and unused for several years and was eventually demolished. A car showroom was built on the site, which later became a Kwik Save supermarket, today operating as a Somerfield Supermarket.

A picture of the supermarket that occupies the site: View link