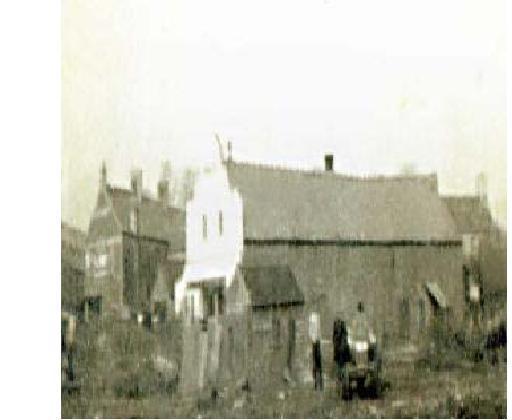 One of the large number of cinemas built after 1910, the White Palace Cinema opened in 1914. It was a simple one-floor hall serving the northern suburbs of Cardiff, and located in the Whitchurch district. By 1927 it was operated by Rowland Williams of Cardiff.

Acquired by the local Willis group it was upgraded with RCA sound in the early-1930’s and was re-named Rialto Cinema.

It appears to have closed in June 1959, and was converted to bingo for a time. After this closed, it survived for a number of years as a horticultural warehouse.

It was demolished and replaced by housing known as "Rialto Court"

Street Directories in the 1920’s and early 1930’s give the name of this cinema as “White Palace” the Rialto name seems to have been adopted with the fitting of RCA sound.

Local legend has it that in its silent film days the ‘White Palace’ like most other small halls used a piano to accompany its presentations. The accompanist at the Palace for many years was Nancy Williams who later became Nancy Arthur of Taffs Well. The lady apparently attracted much critical attention in Whitchurch by purchasing an Indian model motorcycle which she used to travel from home to work. At that time it was not thought right for a lady to own, let alone ride, such a machine.

I am quite surprised that no mention is made of the unusual set up of the mechs in this cinema. To enable the heads to be laced up and run from one position, the projectionist stood in between the machines, could lace up both machines from where he stood. I can remember visiting this box when I was a NATKE rep I also worked for some time as an an FTS driver so visited projection rooms in many South Wales cinemas

Any further details of this unusual set-up?

I am a little bit confused by Mickrick’s comments.I visited the Rialto box circa 1963. The projection equipment had long been removed but marks on the floor suggested that the equipment had been of Kalee origin. W.E.Willis (father of Rex)always favoured Kalee and, with the exception of the Swansea Grand, nearly always installed Kalee 8,11 or 12 machines with Regal arcs and RCA sound in his halls.I operated many of the South Wales 3rd level hall boxes and all were right hand laced machines when facing the screen. I never ever experienced a left hand laced machine throught my career.

I recall that the Rialto box contained five portholes. A set of two for each machine plus one larger port next to the dimmers. These dimmer boxes were still in position but derelict in 1963. The larger of the two had obvious controlled the house lights and the smaller box controlled the footies.In most halls the number one projector was the machine on the left of the box and was the opening machine at the start of a show. To effect a changeover the projectionist had to be adjacent to the machine to which the changeover was being made. After the change over, the immediate task of the projectionist was to apply the dowser to the machine that was being retired.

For this reason most Kalee Regal arcs (Models 11 onwards) had dowsing levers that were positioned on both sides of the arcs. Thus a projectionist could change to the number one machine and immediately afterwards dowse the number two machine. When changing back to the number two machine – as soon as the plates / choppers had been operated the projectionist had to race to the number one machine apply the dowsere and switch the arc off. Failure to quickly apply the dowser would lead to the arc burning through the plates or choppers.

I recall visiting this cinema specifically to see this somewhat unusal set up, I don’t remember the manafacturer of the heads, but I do know thatit was a German design, as far as I know it was the only set up of this mirror image of mechs in the I>K>

The Rialto Cinema has also disappeared. In its place are some new houses know as Rialto Court. So the name lives on. Saturday afternoon matinees at tuppence per person were hugely popular. Films featured serials with Buck Rogers, Flash Gordon, etc, and various western cowboys. At the intermission between films, a lucky ticket number was called out. One week I won a jigsaw puzzle, one of the few prizes I have ever won in my whole life (so far!).

The appearance of this cinema is illustrated in the original plans (Archive) and in a newspaper photo taken some time after closure, showing little had changed in 50 years.