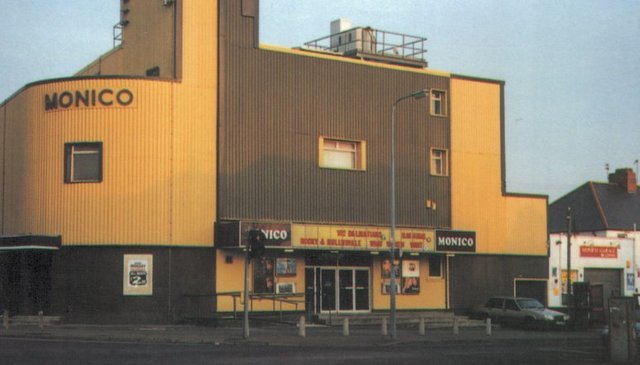 Opened on 19th April 1937 with Gary Cooper in “Lives of A Bengal Lancer”. It had an original seating capacity of 950 in stalls and circle and after a period of operation as an independent it became one of the small Splott Circuit’s suburban cinemas in Cardiff.

The Monico Cinema survived as a twin screen cinema (seating 433 and 156) until closing on 30th January 2003 under the management of Circle Cinemas. The building was demolished and a block of flats was built on the site.

It is interesting to note Eric Evans mention of an organ at the Monico Cinema. I knew the hall quite well from the time I started work at Warner-Pathe in 1955 until I left Cardiff around 1963. I’m one hundred per cent certain that the Monico did not boast an organ whilst I visited the cinema; firstly as a spectator and later as a casual projectionist. Looking back over my career as a jobbing projectionist, I can only ever recall visiting two cinemas in South Wales that boasted working organs.Those were the Capitol and Park Hall cinemas in Cardiff. Alas! I never had the oportunity of working these halls as they did not employ jobbers.

Brian Bull installed an electronic organ in the larger screen when he twinned the Monico. I think it was a “Conacher”(or something similar). It was placed in front of the screen curtains as if it was a Compton or Wurlitzer.
If anyone has the date when Circle Cinemas acquired the Monico it should be possible to find the press cuttings advertising the 4-track magnetic sound screenings which probably took place before the twinning and Dolby installation.

The Monico’s four track magnetic sound system was in place when I was doing casual work at the cinema in the early part of the 1960s. I can never ever recall it being used or even a hearing a mention of it being used in past times. The amplifier, in a tall silver cabinet, stood at the back of the box adjacent to the tall black cabinet that contained the Westrex Sound System. The grey magnetic sound head pickup boxes on the projectors were located below the optical sound heads. The Westars and optical boxes required a two finger loop between the feed sprockets. The magnetic units requiring a three finger loop. The Monico projectors had a fast take up from the start so it was common to lace the leaders with six in the gate.

The Plaza Swansea had a magnificent organ.

Just had another look at my video,there was an organ as verified by Element54,could not tell the make of the instrument. I never saw the Monico inside or out except for photographs but I had no reason to make this up.

Hi SeanP, Unable at the moment to transfer my video on line, hope to do so soon.

I have a 2003 Wales This week 25 minute special on the Monico closing (it’s all in English). It’s similar to the one aired for years earlier about Plaza closing, but more solely about the Monico.

I’ll try and post it to my YouTube channel in the next few weeks and send a link here too.

Thanks Alex, that would be great!

This morning a friend sent me a photograph of the Monico taken shortly before the cinema closed. It came as quite a surprise to me. In my days at the Monico (1960s) the entrance to the cinema was at the bull nose facing directly at the point where Tyn y Parc Road and Pantbach Road junctioned. The brown stained pay box,occupied by long serving cashier Marge, directly faced the entrance.To the right of the pay box was the sweet and kiora kiosk and again to the right of the kiosk was the entrance to the stalls. The manager’s office being at the far end of the stall’s entrance area

The picture I have received today shows the entrance having been moved to the south west of the building and obviously going through what was once the area of the manager’s office. The bull nose entrance now being replaced by a wall bearing a quad poster frame. In my day the cinema was gray concrete all over having never been painted.

The only renovation of the hall in the 1960s,as far as I can recall, was the roof being resealed and the installation of magnetic sound. I was surprised to see that so many changes had been made to the hall exterior, especially to the entrance, presumably post 1965? Were these changes a part of the hall being twinned?

Incidentally, around 1960 the then manager of the hall asked Jackson Withers if it would be possible to attach an electric motor to the masking so that it could be adjusted from the box. The answer was a firm “NO”! The miserly circuit management instead deciding that it would be cheaper to employ a rewind boy at three pounds a week who could manually under take masking adjustments from behind the screen plus do general cleaning during the day time two hour maintenance shift.