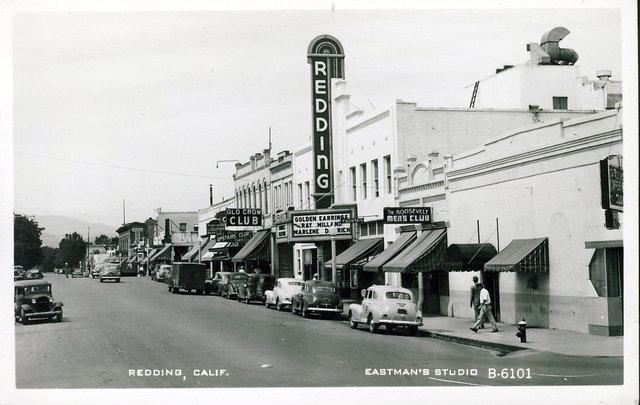 Here are some photos from the UC Davis collection:
View link
View link

The Redding Theatre is mentioned several times on this page of the Cascade Theatre website. According to that page the Redding Theatre was built in 1910, and the wording gives the impression that by the 1930s it was being operated by T.&D., Jr. Enterprises. (Note that the page is not entirely reliable, though, as it names the owners of T.&D. as Turner and Duncan, not the correct Turner and Dahnken.)

There’s another photo of the Redding Theatre accessible from this page at the Redding Record-Searchlight’s website.

The current view looks nothing like the old pictures. Completely redeveloped.

Given the fact that the front of the Redding Theatre was designed in a style that was typical of the 19th century, and was out of date by the 1900s, it’s possible that Leonardini’s project was to build an auditorium behind his existing business building, the Paragon Block. It would explain why the theater’s facade was so old fashioned.

Now that I know that C.C. Dakin designed this theater, I’m especially sorry I never got to see it. Here is a 1923 picture of Pul Elder’s Book Shop in San Francisco, designed by Dakin a few years after the Redding Theatre. Though his work fell into obscurity in the later 20th century, it has recently been rediscovered, and those of his buildings which have survived are much appreciated by aficionados of California architecture.

The Redding Theatre was altered in early 1927. The January 7 issue of The Film Daily said that the stage was being enlarged, the scenery loft rebuilt, and the interior decoration rehabilitated.