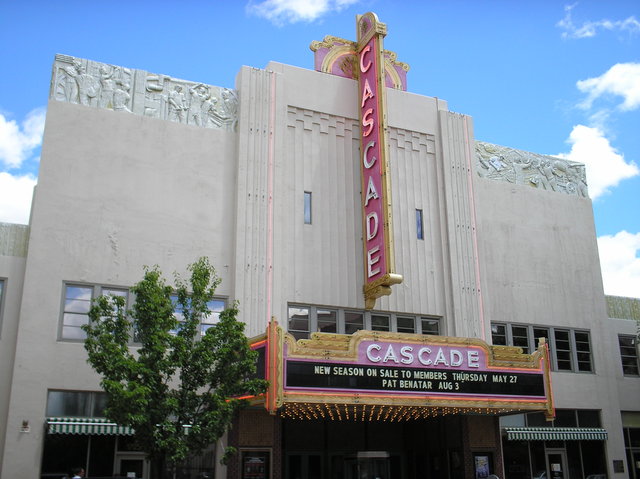 When the Cascade Theatre was built in 1935, Redding’s population was only 7000, but this opulent movie palace seated almost 1350. Designed by San Francisco architect J. Lloyd Conrich, and built by T & D, Jr. Enterprises, the Cascade was constructed in the midst of the Depression as a showcase for first run movies and vaudeville.

For six decades, the Cascade Theatre was a staple attraction for Redding’s downtown, drawing people in to see motion pictures, vaudeville acts, and music performances. Local businesses thrived, restaurants had a stream of customers, and downtown Redding was a bustling center for culture and commerce. And the community had a place to call its own; for films, concerts, recitals, church services, and civic ceremonies—the Cascade was the heart and soul of downtown Redding.

But like many downtown theaters of its era, the Cascade struggled with the rise of multiplex cinemas. After years of struggling, the Cascade closed in 1997.

In August of 2004, the Cascade was reopened after a restoration project as a multi-use performing arts venue and movie theater.

Does anyone know more about the architect, J. Lloyd Conrich? Did he design other theatres, and specifically in the S.F. Bay Area where his office was located?

Salih Brothers was the construction and contracting firm that built this theater. I can’t find any evidence anywhere that the firm was ever engaged in architecture or design.

A few more photos can be seen here and here.

In the dark years of competition with other theaters (definitely the 80’s and into early 90’s), they split it into 4 screens: 2 enormously tall but narrow downstairs theaters and 2 theaters in the balcony. The separating walls on either floor were very poorly insulated and you could often hear if there was a noisy movie next door.

Came upon this art deco gem by accident…trying to find a theatre in California by the name of REDMOND. It was featured in the movie, First Daughter.

The theater auditorium interior shots were filmed at the Los Angeles Theatre in downtown Los Angeles. It no longer operates as a theater, except for the annual Last Remaining Seats events held by the Los Angeles Conservancy, but in recent years it has been the shooting location for many movies, television shows, and commercials.

The lobby of the Los Angeles Theatre also served as a location for one of the movie’s early scenes, but it wasn’t presented as a theater.

This page at Seeing Stars has some information about the shooting locations for First Daughter, and has a number of stills from the film you’ll probably recognize.