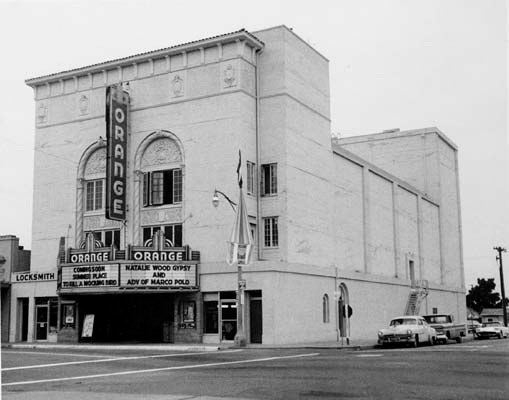 In 1923, plans were announced for a new Adams Theatre, intended to be the largest and most luxurious in Orange. After several years of litigation delayed the construction, it finally opened on May 22, 1929 and was known as the Orange Theatre, with A.B. Crawford as resident manager. The theatre boasted 1,100 seats, a green plush curtain with rich folds, gold braided rope and trimmings, and the latest in sound equipment. The theatre presented first run films for many decades, and for part of the time being part of the Pantages circuit.

Over the years, modernizations covered up some original decorative details. The theatre, still containing its original operating organ closed in the early-1970’s, but was reopened to kick off a $60,000 renovation project in 1974. The renovations included new curtains in a brown and orange clor scheme, making the outdoor foyer part of the interior, and extensive behind the scenes improvements, and renovation of the beveled glass mirrors on the stair landings. It reopened as the Orange Playhouse, which immediately incurred financial difficulties. Late in September it passed on to the Pacific Academy of Performing Arts, but by Spring 1975, PAPA folded.

In late-1975, plans were underway to convert the Orange Theatre into a porno movie theatre, when Mr. Joe Magnlioto, assistant pastor at the Amazing Prophecy Center untertook an ‘Impossible mission’, establishing a new ministry, the Son Light Christian Center, which was able to buy the theatre, clean and renovate it and open it as their new church. The Pasadena Playhouse was interested for a time in 1994, with opening a second stage at the Orange Theatre, but Sons of Light was not interested in moving, and has remained to this day. In 2003, the Son Light Christian Center was turned into the ‘Redmond Theatre’ for the location filming of scenes for the movie “First Daughter”.

A Wicks 2Manual/8Ranks organ, Opus 279 was installed during the original construction of the theatre, but has now been removed. This was one of the last Wicks theatre organs manufactured.

Was there more than one Orange Theatre in Orange, CA? The Son Of Light website declares a “Wurlitzer Organ” having been installed there. But on page 710 of Junchens book, its said (with interior pictures) that Wicks opus 879,a 2/8 (and the last new Wicks threatre organ installed in a theatre) was installed in the Orange in 1929. Cost $17,500, less $10,075 for used organ traded in. Wonder where they got the trade in from!

Nevermind, answered my own question. Found the interior shots on the Son Of Light website. Same theatre as in the Junchen book, and the console is most defintely a Wicks and not a Wurlitzer!

Here is another photo:
http://tinyurl.com/yb3l478

Additionally, this statement in the original article that the organ “is still playing for services today,” is incorrect. There hasn’t been an organ in this building for over 30 years.

I just added a photo of the Orange Theatre as the Regent Theatre, with a film from 1964 on the marquee. It is clearly the same building. Was it mocked up as the Regent for one of the above films or another? There is a more modern bus in the background, and a police officer possibly blocking traffic with the exception of the period correct cars.

@DavidZornig: Sorry you had to wait for a late response here but it was mocked up as the Regent Theatre for “That Thing You Do!” (1996), where Old Towne Orange stood in for 1964 Erie, Pennsylvania. In the photo you shared, the adjacent building was adorned with a Woolworth sign – also a prop created for the film.

Thank you cardboardroom. I will add your description beneath it in the photo gallery.