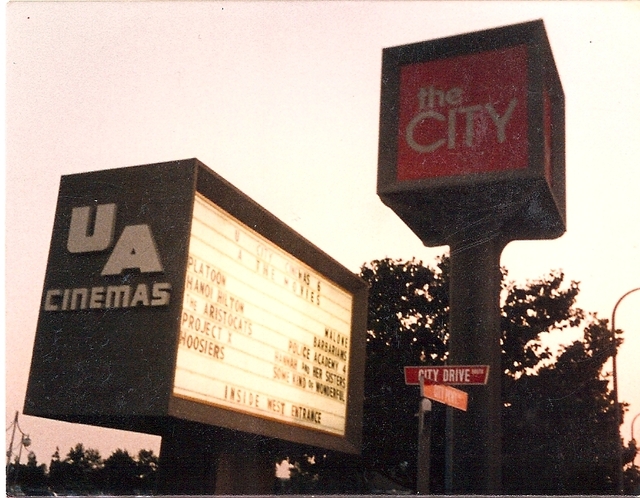 Located in the City Shopping Center. This appears to have been another first run mall theatre built by UA and opened on November 17, 1971 with four screens. By August 1986 another two screens had been added.

In the August 24, 1986 Los Angeles Times, the United Artist’s Theatres listings show this to have been a six-screen multiplex, not a four-screen.

Was this the outside the City Mall, near JCPenney / The City Tower?

This theatre was located inside of the mall. I don’t recall which department store it was located near.

The Plitt (later run by Syufy/Century) City Center Theatre was located in the parking lot of the mall.

Thanks Bill. I do recall the inside theatre. It was kind of in between May Company and JCPenney (I only recall this mall having two anchors). I only went to it a handful of times before it closed.

Very cool theater in it’s day. It was originally a 4 plex then added to more to make it 6. I believe the managers name was Mr. Fink. New the 2 projectionists, Clyde and Frank and would watch movies up there and watch him thread those projectors. Century projectors and Cristie AW2 platters.

Must’ve seen Dawn of The Dead a few dozen times here at midnight screenings. The earliest films I remember seeing there are Corvette Summer, Orca The Killer Whale and Island of Dr Moreau. Saw The Thing here on opening day aside from my friends and myself there must’ve only been about three other people!

This opened on November 17th, 1971 with four screens. All screens were showing double features at the time.

The address for this place was NOT “City Drive S.” as indicated above (do people just make this stuff up?). The correct address and complete name of this theatre was UA City Cinemas 6, The City Shopping Center, 23 City Blvd. West, Orange, CA 92668. As for there being no ad, did you check the Orange County Register or the Orange, Santa Ana, and Garden Grove local papers? Interesting side note: I understand that The City Shopping Center, which was itself a part of a larger complex called The City (which also included the outside-mall ABC City Center Theatres twin that was later acquired by other chains and split into a four), was originally an outdoor shopping mall. Then they put a roof on the mall in 1981 (around the same time that the UA expanded from 4 to 6). Then, of course, it became an outdoor mall again in the late 1990s as The Block (and since then has been renamed still again as The Outlets).