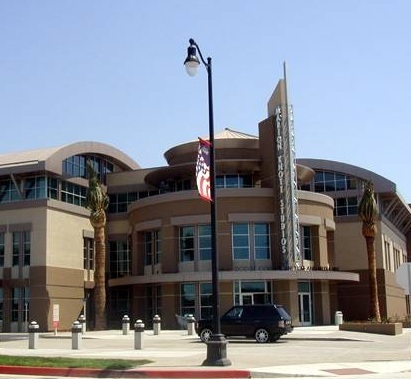 The Folino Theater opened in August of 2006 as part of the $31-million Marion Knott Studios. The studio is part of Chapman University’s Dodge College of Film and Media Arts, which offers a graduate program in filmmaking. Bastien & Associates of Tustin, California designed the theater, which is named after benefactors Paul and Daranne Folino. The 150-year-old Chapman University has been a respected institution in Orange since 1954.

The cinema is equipped with Kinoton 35mm projectors, a Barco 2K digital projector and Dolby Digital surround sound. The college can name film directors and producers John Badham, David Ward, and Tom Mankiewicz as members of it faculty. In fact, all of the faculty, support staff, and administration at Dodge College have extensive experience in the film industry.

Another notable personality who spoke at Dodge College in April of 2010 was filmmaker Jerry Lewis, whose daughter attends Chapman.

On March 23, 2011 Chapman University announced the formation of Chapman Entertainment, a professional film production company, whose goal is to produce and distribute from five to ten pictures a year. The college stressed that these will not be student films but high quality youth thrillers and comedies that can compete in the commercial marketplace. Equity partners and private donors will provide funding for the films, which will have known stars and supporting casts. This is something no other film school has ever done before.