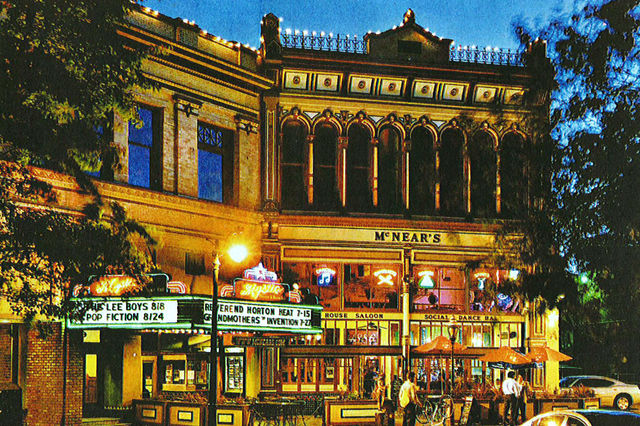 Originally built in 1911 and opened January 25, 1912, this former movie theatre is now a venue for live music.

This theatre was also called the State, at one point. It was the Plaza when I photographed the exterior in 1984. My photo shows it playing a double feature of “Kagemusha,” and “Throne of Blood.” A year or two later, it had been renamed Palace. By the late 1990s, it had been renamed McNear’s Mystic.

Here is an undated photo of the State:
http://tinyurl.com/ynpqkc

Very nostalgic at finding this link. I was the projectionist at the then State Theatre from sometime in 1968 until January 1970. Alan Finlay was the owner.

There is a brief shot of the State Theater in the background, in a scene in “American Graffiti”. I believe it is when Milner pulls up to save Toad during a beating by the car thieves who stole the `58 Impala. Also when Milner returns to his own car.

The April, 1913, issue of a regional magazine called The Northern Crown contains an advertisement for the Mystic Theatre. No address is given, but assuming it was the same house as the current Mystic Theatre, it has gone back to what was probably its original name.

I forgot to add that the squad car scene in “American Graffiti” was also shot in front of the then State Theatre. The lot they pull out of is still there as well. Sadly the below Movieclips version does not hold for the reaction shot of the police in their damaged car.