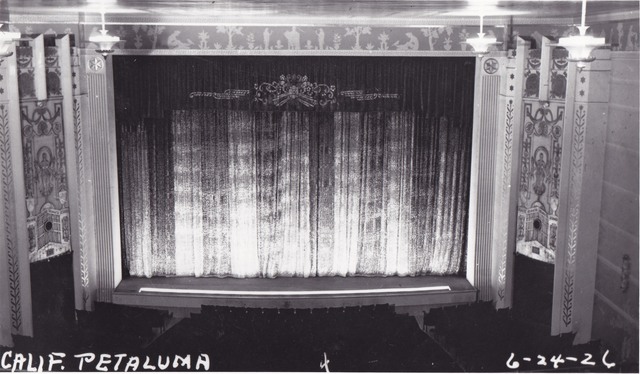 The Phoenix Theater, run by Thomas Gaffey opens its doors in the afternoon to teens who might have no place else to go–kids who don’t want to go home to abusive or absent parents; adolescents who just want a comfortable place to spend time, away from the watchful eyes of local police, around an adult who understands and respects them – someone who grew up in the same environment. Calling themselves the “Phoenix Family”, these teens not only hang out at the theater but help keep the place clean, including performing minor repairs and renovations.

Contributed by A Gehrke
Get Movie Tickets & Showtimes

I just saw a story on local news TV that stated that there are NO theatres in Petaluma. As a result, 7 young ladies got together and prompted local officails and redevelopers to include a six-plex in a local downtown redevelopment project. The news showed them breaking ground today.

Status should be changed to OPEN – live performance

The California Theatre in Petaluma was on a list of theaters operated by the T&D circuit that was published in April, 1927. The circuit was also operating the Mystic Theatre at that time.

We visited this little gem in Petaluma CA this past Saturday. Still open with a live music venue but It has so much potential. Clean up and turn into a retro cinema with live shows on the large stage. The place has the most graffito I have ever seen in a old movie theatre but It is more like custom bright color art work and we enjoyed It in places. Thanks to Tom the manager who keeps the place open and was nice enough to let us take some photos. Hope to see the theatre restored some day soon. They don’t have to go first movie run but show some classics now on DCP on a large screen with surround stereo plus live stage shows with different acts. Put semi new seats back in on the main floor. So nice to see this huge former cinema still open and not some little shoe box cinema they have around these days.

The February 15, 1908 issue of the San Francisco Dramatic Review contained an item saying that “after successfully managing the Hill Opera House in Petaluma”, Al White was moving on to manage the Unique Theatre in San Jose. From the early 1908 date I’m guessing it is safe to say this theatre dates to an earlier year.

In 1917, Dr. John A. McNear, who already ran another theatre in town, the Mystic, took over operation. Early on, he featured 4 days of motion pictures a week, and advertised those shows to patrons at the Mystic.

In 1924, T & D Jr. Enterprises Inc. acquired the Hill from McNear. The “Moving Picture World” in their September 13th issue mentioned that plans for a $40,000 remodel were announced, their October 25th issue said contracts for that project had been awarded.

Prior to the start of the remodel, a Wurlitzer was installed on September 23. That was Opus 909, which had 2 manuals and 6 ranks.