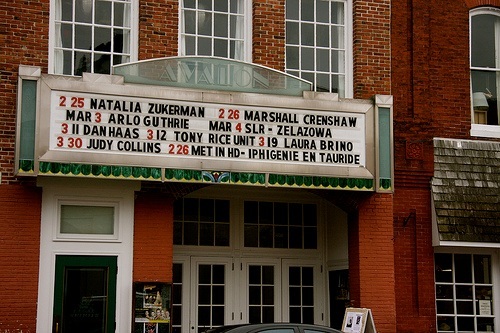 Built in 1921 as a vaudeville and movie house, the New Theatre was opened in January 1922. It was renamed Avalon Theatre on April 11, 1936 and was operated by the Schine Circuit from October 1938. It was closed in 1985. It was restored in 1989 and converted into a performing arts center.

When the Avalon Theatre was a movie theatre it seated 620 people.

Here is a 1989 article about the renovation:

The Avalon Theater, built in 1921, is currently undergoing a face lift to convert it into a state of the art performing
arts center. The renovated theater will be equipped with high technology sound and lighting equipment and a curtain
svstem on the stage to permit multiple backdrops for drama and musical productions. The cultural and artistic programs will serve the Mid Shore community.

The theater is located in the heart of the historic district on the corner of Harrison and Dover Streets opposite the Tidewater Inn.

The theater building, originally called the New Theater, was built during the hevday of the silent movies and the vaudeville era, and was considered spectacular. The theater was adorned with leaded glass doors at every entrance, an 18-ft ceiling dome with 148 lights, an electric pneumatic organ, an electric piano player, and a private telephone system.

The tin ceiling acoustical dome still remains today and is being restored by J. Gibbons Inc. of Baltimore. The pipe organ has a new home at the Richardson Park Methodist Church in Wilmington, Delaware following a brief stay in Trinity Methodist Church and the St Mark's
Church in Easton. The leaded glass doors are still being used and are in their original condition.

On the second floor of the theater building there was a balcony, and a ballroom. Ceciles Restaurant, a privately owned enterprise, now occupies the ballroom space and has been designed following the grandeur of the 1920s ballroom.

The mam balcony of the original theater remains the same as the 1920s and the lower level of the main balcony will be restored to the original 4 boxes, each containing at least 10 seats. An orchestra
pit has been constructed immediately in front of the stage to ommodate musical accompaniment of live performances.

The basement of the Avalon Theater building originally consisted of a kitchen, with a dumb waiter to the upper ballroom, and a billiard parlor. The basement today looks quite different. It has been converted into a rehearsal room, dressing rooms, managers office
and storage space for the performing arts center. The old scales and candy machines from the Avalon Theater during the 1930s are on display and functioning in the lobby area of the basement.

This 2001 article discusses the theater as a performing arts venue:
http://tinyurl.com/3l3m3d

What a great thing to see the Avalon as shown in the 1980’s picture. Thanks. My father was the young handyman who assisted/trained as projectionist, then became the projectionist when the older gentleman retired. He worked at the Avalon from about 1954 to its closing in the 1980’s. His name was Harvey Conaway. I spent almost every Saturday afternoon at the Avalon engrossed in the current movie, and remember when they always showed a cartoon before the feature- and played the National Anthem before each viewing. I don’t recall my first movie there, but when I attend shows there now – I always look up at the small projectionist room where he spent so may hours of his life- and remember him there. There were two huge projection machines in that little room which held the large reels of the old films he would splice and make what ever repairs were needed to get them ruunning. They somehow reminded me of the mechanical bulls you see nowadays- thanks for the pictures…

Old Avalon Theater is up for bids
(The Capital, April 18, 1992)
EASTON (AP) – An historic theater that featured vaudeville acts, silent movies and world premieres is being auctioned off next week because a non-profit group failed to meet its mortgage.
“The town never intended to own and operate a theater,” said Robert Karge, town clerk and court-appointed receiver for the theater.
Built in 1921, the Avalon Theater held several world premieres, including “The First Kiss,” starring Gary Cooper and Fay Wray in 1928.
The art deco theater closed in 1985. Following $1 million in renovations financed by Easton and the state, the town sold the Avalon in 1989 to the Mid-Shore Center for the Performing Arts for $738,000. Easton also co-signed on a line of credit and appropriated additional money to help the group. Mid-Shore attracted top shows, ranging from a Phil Donahue taping to chamber music and Motown revues.
But it failed to pay its bills. The group asked the Town Council to take over in November and the theater closed Dec. 2. The council foreclosed on the theater in March. Easton officials want to recoup the more than $800,000 in unpaid mortgage, interest and late charges the town has tied up in the facility. If there are no bids, the town could be forced to keep the theater and operate it. Town Council resident Eugene H. Price said “It’s a very, very nice facility, but how to make it self-sufficient, I don’t have a magical answer for that,” he said. “But there is strong interest in getting the doors open."
A group of downtown businessmen recently organized as the Friends of the Avalon and approached the Town Council with bookings for the theater. The council, however, rejected the shows, preferring to keep the theater closed until after the auction.