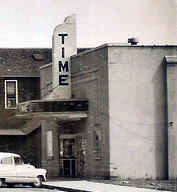 In 1995, it was reopened as the Allen-Hovde Theatre, home to the Lake Pepin Players, as a legitimate theatre. This operated until 2005. The building was sold in 2005 to a new owner who had the historic theatre razed.

Anonymous comment, July 21, 2007: “I remember a very funny production a couple of years ago where each time a train would go by the entire cast would stop and yell “TRAIN”!! It is missed, even by newcomers like me.”

Linda Brassfield, July 21, 2007: “My memories of the TIME Theater are inextricably associated with my family. Built in 1946, my grandparents (Doug & Merle Ingalls) had assumed ownership by the time I was born (or shortly thereafter) so it was a huge part of my life. My grandparents moved into the tiny upstairs apartment and provided many a meal to me and my family, especially summertime lunches when my mother was working. There were also whole family events — like Christmas which we celebrated in the lobby. As kids, my brother, my cousins, and I enjoyed helping clean the theater after the show. It seemed such fun to pop the seats back up. We also threw crushed popcorn boxes and other debris into the cans that were pulled down the aisles and, when we were older, got to sweep the popcorn kernels out into the aisles where my grandfather scooped them up by running a snow shovel up the aisle. The popcorn was the best ever. It was popped in what we called ‘grease’ – actually lard, I think, which came in 5 gallon bright yellow cans. These cans along with bags of corn were kept on the landing up a small flight of stairs to the left (east) exit.

“I probably saw every movie ever shown there – at least through 1965 -and many of them more than once, though sometimes I’d just sit outside the east exit and listen with a friend. After my grandparents, my parents ran the theater along with my aunt and uncle and the family tradition continued until they sold it in the ‘70s. I was delighted when, after many years, the theater was reborn as the Hovde-Allen Theater, home to the Lake Pepin Players which provided the community with many fine live performances. I feel a great sadness at the loss of this community landmark and regret the manner in which we lost it, but I know that many, many people will continue to tell theater stories about it for a long, long time.”

Mary Seymour, August 1, 2007: “Grandma Thompson always bought me my favorite birthday present as a child – A WHOLE BUNCH OF TICKETS TO THE THEATER! During the Christmas season, when Santa came to give rides and candy, Santa also gave the wonderful popcorn from the theater. Better yet, the movie that was shown on that day for the children was not a movie at all. IT WAS ALL CARTOONS, AND I THINK IT WAS FREE. My favorite movies as a child were the scary movies like “The Fall of the House of Usher” or “The Body Snatchers”. For me, the scariest one was “The Sea Creature”. Just before the creature would come out of the water, you could hear the waves but not see the water. In those days, we lived on Front Street (k/n/a First Street), and I had to walk home alone. I would cut through Steve Breitung’s back yard, which had a lot of trees and no neighbors except us. I could hear the waves but could not see the water. I still think of that movie when I can hear the waves late at night.”

Kitty Latane: “I wrote an article about the theater which appeared in the ‘Notes from the Laura Ingalls Wilder Memorial Society,’ and a more recent version in the “Courier-Wedge.” Several women have commented to me that their first dates with their husbands had been at the Time Theater.”

Is the Ingalls family who operated the Time Theatre, related to Laura Ingalls Wilder, who was born in Pepin?