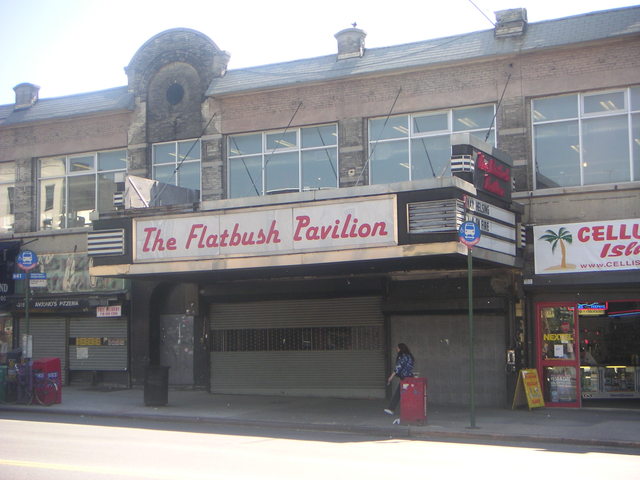 The Flatbush Pavilion, located in Brooklyn’s now fashionable Park Slope, is down the road from where such former movie palaces as the Fox and Albee once stood.

Of course, now that we know the theater, if you look above the building across the street from the Strand, you can make out the V-shaped roof-top sign for the Brooklyn Paramount looming a couple of blocks away on the corner of DeKalb and Flatbush Aves. That should have been a dead giveaway.

The marquee is still up and it’s still an American Apparel clothing shop (socially conscious, American and union made, sweatshop free).

The little pics above the marquee on the sides are no longer there but the “1, 2, 3” still is with messages on the side.

Here is another photo of the marquee:
http://tinyurl.com/3275jh

The closeing of this dive was a mercy killing. The place was a horrid place to see a film. The lobby was dark and dank; the auditoria were even more forboding. The film presentation was beyond bad. In a day and age of 6 channel digital sound, this place was still sporting a mono system in both rooms.

It was a scouting exhibition just to find a seat that wasn’t broken, and even those that were in decent shape were very uncomfortable.
The screens were placed much too high making the viewing angle very hard on the neck muscles. Because it was twined, the rooms were long and narrow, giving you the feeling that you were in a tunnel. This shape was detrimental to speech intelligibility, which sank to near zero; it was a good thing they ran lots of foreign films so you could read the dialogue.

This abomination is an example of just how terrible a movie theatre can be when it is tortured into more than one screen, even though it was designed as a single — a sorry practice in the rush to multiplex. It is no wonder it drove patrons away.

Sadly, there are many, many theatres that should have been saved; this is not one of them.

What’s gonna happen to this place now that American Apparel has gone belly-up? I hope whoever moves in next restores the marquee.