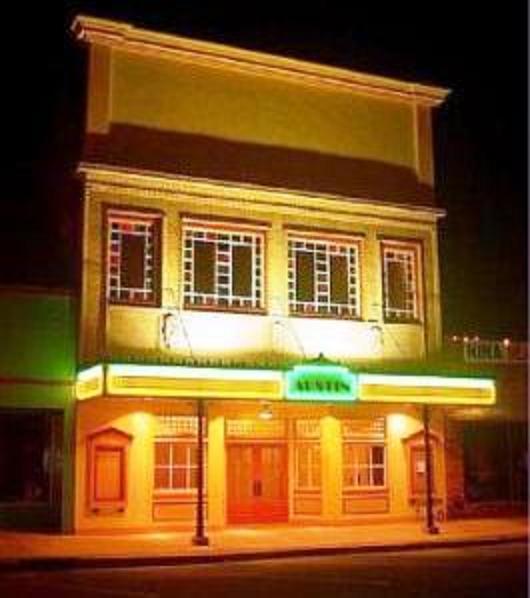 The building that became known as the Austin Theater was purchased in November 1915, by George Hiley Slappey (1871-1934). The building originally housed a dry goods store.

In 1916, the building was remodeled and a second floor auditorium was added. According to Mr. Slappey, the theater was intended to have "the sumptuousness of a palace, the convenience of a house and the agreeableness of a county seat."

In 1934, the Austin Theater was leased to the Martin-Thompson theater chain from Hawkinsville, Georgia. Upon his death, Mr. Slappey’s estate sold the building to the Martin-Thompson Company who added a third floor projection booth and renamed it the Peach Theater. From that time until the late-1940’s, the building experienced its peak use as Fort Valley’s premier movie theater.

It does not have theatre seats or a screen, but the facade has been painstakingly restored.

The official site is down. You can try this one, but it seems to be problematic as well:
http://www.fortvalley-mainstreet.org/

I think they’re still working on it.

According to the records of the New York Terra Cotta Company, the 1916 remodeling of this theater was designed by an architect named P.P. Scroggs. Philander P. Scroggs was an Augusta architect who later formed the partnership of Scroggs & Ewing with Whitley L. Ewing.

Local citzens of Harlem,Ga. have done the same thing to the COLUMBIA theatre there.As hard as i have tried,i cannot get any of the locals to get on CT.

From an article I read recently in the Macon Telegraph they are continuing the restoration of the Austin which was the Peach at one time. They had a fund raising, a one man Mark Twain show at the theater, so I would think they have some sort of seating if not permanent. The exterior looks great.