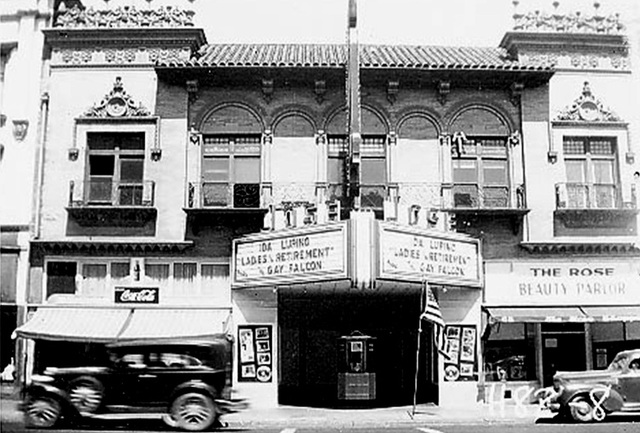 Built in 1904, the Jose Theatre is the oldest theater in San Jose, California. It was remodeled in 1933.

It is a designated city of San Jose Historic Landmark and is eligible for the National and California Registers.

In June of 2001, the city council agreed to a ten-year lease with the Improv Comedy Club, which opened in the Spring of 2002.

The second photo submitted by ken mc shows South Second Street (with the Jose) in the mid-1980s, when the street was ripped up for the Downtown Transit Mall. While the end result of the mall’s construction was ultimately a positive one for Downtown, the construction process was very hard on the businesses at the time. You can see that the Jose was weathering the storm by staying open with the triple feature policy it had presented for decades. At this point it would have still been operating under General Theatrical Co.

Did you know that the Jose Theatre had a 4-man orchestra? Here is a picture of the group ca. 1910.

During the War of 1812, Francis Scott Key, accompanied by American Prisoner Exchange Agent Colonel John Stuart Skinner and Mexican Attache Jose Romero-Gonzalez, dined aboard the British ship HMS Tonnant, as the guests of three British officers. Skinner, Key, and Romero-Gonzalez were allowed to return to their own sloop, but were not allowed to return to Baltimore because they had become familiar with the strength and position of the British units and of the British intention to attack Baltimore. As a result of this, Key was unable to do anything but watch the bombarding of the American forces at Fort McHenry during the Battle of Baltimore. Peering through the heavy smoke, he commented to the Attache, “Jose, can you see?” Shortly thereafter, he was inspired to compose our national anthem.

There is no Jose Romero-Gonzalez. I was just wasting valuable web space. I’m going back to work now.

The good old Jose… we would go there Saturday afternoons and pay 10 cents to see three movies. Lots of hispanics would hang out there, sometimes there were fights and a place where people “made out” and just hung out..

Worked at this theater when going to San Jose State, now a state university. Wife and I met there and have been married for 40 years. “Mr. Miller” managed the theater and told us we would never find another job like that. He was right.

I did a little electrical work in this theater in the 80s. The top floor contained a kitchen and bedrooms/dorm. Apparently this was an old vaudeville theater and the performers stayed in the apartments when playing the theater. For better or worse, the owners in the mis80s allowed employees to play paintball in the space giving the place a post apocalyptic look. Zombie central.

My favorite theatre The Jose! Saw the worst and best movies of the 70’s there. As a teenager was both traumatized and fascinated! All the Bruce Lee Kung Fu films – Chinese Connection, Fists of Fury, Enter the Dragon, Blaxploitation films – Super Fly, Shaft, Cleopatra Jones, Blackula, B Movie Horror films – Race with the Devil, The Devil’s Rain, Texas Chain Saw Massacre, The Legend of Hell House, Night of the Living Dead, The Incredible Two Headed Transplant. Those Satan Biker movies…yikes! We’d go in when it was light and come out and it was dark! $1 for a triple feature, not to mention the other entertainment – Winos, Prostitutes, kids running up and down the aisles. Awful threadbare seats, gross bathrooms with those pink perfumatic perfume despensers. The best memories! :)

The Jose, built in 1904, is the oldest theater in San Jose, located on Second Street near San Fernando Street. Construction of the Jose was started in 1903 under the ownership of David Jacks, a Monterey landowner who was the namesake of Monterrey Jack cheese. At that time, the theater was a popular showcase for stock companies and vaudeville acts. Its history includes an appearance by magician Harry Houdini and a stint as a vaudeville house. Within a 10-year period the theatre ownership changed from Jacks to Chicago speculator William Warren.“ "In the 1920’s, James Battey bought the Jose as an addition to his local chain of theaters. Under Battey’s tenure, the entertainment was changed to include silent motion pictures with the customary live musical accompaniment. In the 1930’s the Jose began its history of showing second-run films. In 1933 Battey invested $35, 000 for remodeling. In 1949, James B. Lima’s General Theatrical Company purchased the Jose.”

“Subsequently, ownership of the Jose was assumed by Barry Swenson and Jim Fox, who closed the theater after the Loma Prieta earthquake. Swenson and Fox said it was not economically feasible to perform the retrofit to keep the theater open. The Jose Theater was declared a historical landmark on April 16, 1990. After more than a year of negotiations, the San Jose City Council agreed to pay for resurrection of the Jose Theater at a cost of $5.1 million. It will be leased for 10 years to the Improv comedy club, opening in 2002. The theater, which seats nearly 500 people, will be the largest of Improv’s 12 venues.”

“Monterey Jack cheese was named for entrepreneur and financier David Jacks of Monterey. This is the same David Jacks who commissioned the construction of the Jose Theatre vaudeville house in 1904, which still stands at 64 South Second Street in San Jose. In 2002, it was reopened following a multimillion dollar restoration, renovation, and retrofit.”

“David Jacks had an eye for developing someone else’s product into a huge business. In the 1880s, Juana Cota de Boronda needed to support her family. Her husband became crippled and she had 15 children. At her Rancho de Los Laureles in Carmel Valley, Monterey, she prepared high moisture cheese by using a method brought from Spain to Mexico and then California by the Franciscan padres. The cheese was known as Queso de Pais. She sold it in local markets. It became a much wanted item, but Senora Boronda could not mass produce it given the limited number of milk-producing cows on her Rancho.”

“David Jacks took the idea, and created a conglomerate of about 15 dairies to compete with Boronda. He called his product Jacks Cheese. Some consumers looking for Boronda’s cheese would ask for the "jack” cheese (cheese made with a press or jack). Some would ask for Monterey Cheese. Capitalizing on the confusion of terms and producers, David Jacks cleverly renamed his brand “Monterey Jack Cheese” so all buyers would gravitate toward his cheese. Of course, Boronda was wiped out and Jacks became wealthy, enabling him to build the Jose Theatre, among other enterprises.

The Jose Theatre is a designated City of San Jose Historic Landmark.