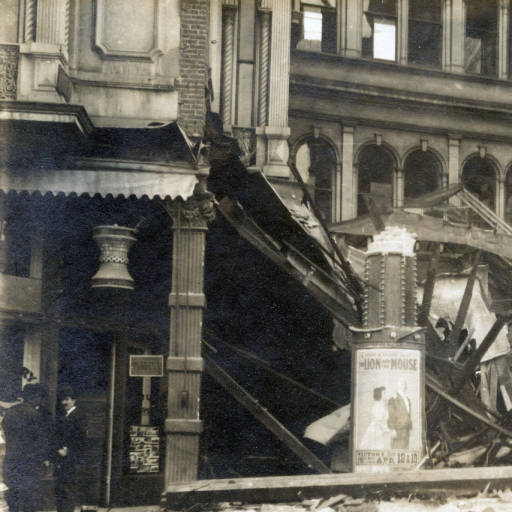 San Jose’s Crest Theatre began life in 1899 as the Victory Theatre. Built by Senator James Phelan, and designed in what old pictures seem to show as a Craftsman or perhaps Art Nouveau style with Egyptian columns in the entrance, it was originally a legitimate theater, hosting top-name stage entertainment.

By the 1930’s, however, movies were the primary fare, though stage presentations were offered occasionally through World War II.

In Spring of 1936, the theatre was given a new facade in the Art Deco style to the plans of architect William I. Garren, with masks surmounting the arched windows.

After WWII, drawings were made of a proposed total rebuilding of the Victory Theatre in a romantic Moderne style similar to many of the Skouras theatres of the time, but with a facade rather remeniscent of the Oakland Paramount.

These plans were never carried out. The Victory Theatre was renamed the Crest Theatre circa 1950. The huge two balcony auditorium burned on June 6, 1965.

Adjacent to the site of the theater is a parking lot called "Victory Parking," a remnant of the lost showplace.

After the fire, the Crest Theatre vertical sign was removed and relettered, to be reused on the Jose Theatre–then also run by General Theatrical. There it remains today, recently relit with the Jose’s restoration.

I was only in the Crest once as a kid in the early 60’s. A friend and I split off from others who were going to a Disney film at the Fox, as we preferred the John Wayne film that was playing at the Crest. I was immediately struck by two things: it still only cost a quarter to get in, and the size of the huge auditorium. No other theatre I had been in downtown had two balconies. This was my first time inside a theatre that truly had a “nosebleed” section. A few years later the Crest burned. I had always felt that had it survived, the Crest would have been an exellent candidate for a restoral like the Fox/California has enjoyed.

I remember going with my Mom to the Victory Theatre when I was 7 or 8 years old. We would go every week because they would give away china. My mom would collect the pieces of china every week to make up a complete set. Just finding this entry for the Victory brings back many happy memories.

My mother collected green stamps from gas stations. She used to fill up her tank once a week, always for $2, and she would drive practically to another state to find someone who was giving away those stamps.

My parents owned the beauty salon (Gustafs) next door to the Crest theater … it was the Ice Cream shop in the picture. My younger brother and I spent many Saturdays at the 25 cent cartoon matinee, The top balcony was roped off and off limits at the time though that did not stop my brother and I from exploring it after we got bored with the cartoons. We discovered that the theater stored huge tubes of pre-popped popcorn up in the top balcony. In our explorations we got way up in the top rafters above the stage and behind the screen. In fact there wasn’t too many places we didn’t explore in that old theater. I remember the old clock in the theater with the fluorescent green hands and numbers that you could see in the dark. The snack bar served popcorn in collapsible square boxes that made pretty good frisbees when empty. To this day I mourn the loss of that old theater. By the way … do you remember the explosion at the J.C. Pennys around the cornet in the early sixties ?

The explosion was in March 1963:
http://tinyurl.com/a5dwyj

Thank you VERY much for the newspaper article. I am still looking for pictures of the old theater … I have several but would like to find some of the old beauty salon. I do know where the old sign from the salon is. When I wasn’t at the Crest my parents would drop me off at the YMCA on the Alameda. I would walk back to the salon at the end of the day. On the way back I would stop in at the old dilapidated Victorian house kitty corner to the YMCA to play. Even at my tender age 10-12 at the time I wondered who the people were that had lived in that house and why they would let what was once a proud and beautiful home become the wreck that it was … it is now long gone. A couple of years ago I searched out through old records ho owned the property and thatit was owned by one D.E. (David Emble) Appleton who owned a publishing at 508 Montgomery Street in San Francisco. The publishing company published a book called Puts Golden Songster which contains songs written in and about the California gold rush. This is significant to me as I am a past president of a historical group call E. Clampus Vitus … clampers … The clampers main function is to commemorate lesser known historical figures mainly from the California Gold Rush … I find amazing how fate works ….

An article about the recently completed remodeling of the Victory Theatre was published in the May, 1936, issue of The Architect and Engineer. The author was the architect of the project, William I. Garren.

Thank you Clamper1797 for sharing your wonderful memories and stories! I love hearing about everyone’s love and heartfelt loss of our beautiful downtown theatres and structures. I grew up at the tail end of all these places in the early 1960’s. I still remember going to the movies with my family – shopping in downtown San Jose with my mother, lunching at Hale’s in the basement (the wonderful toy department!) :) , Hart’s, Blums, Roos Adkins, Penny’s, Woolworth’s to eat at the counter. I mourn the loss of downtown and those wonderful places, and it saddens me that no one thought to preserve our beautiful beloved downtown San Jose. Pure heartbreak!