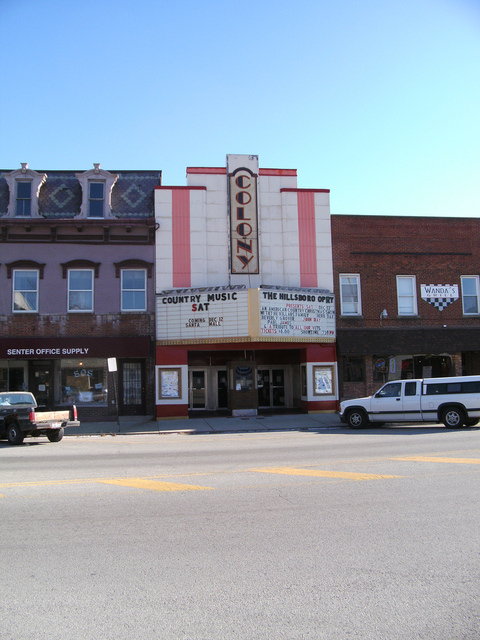 The Colony Theater was opeend in September 1938. It was operated by Chakeres Theaters Inc. by 1950 and operated into the early-1970’s. In recent years it has been a concert and live entertainment venue, but had closed by March 2016.

Probably just the one. Status should be open/live performances, I believe. Thanks for the information.

Joseph Faris was the manager back in March 1970,he commented to Boxoffice on the epic movie,“BATTLE OF BRITAIN” “It was an excellent picture.Plenty of Action.Most people who saw it thought so too”.It played Wedensday- Monday.Weather was Cold.

I would like to have my book signing here at this theater this month. Who do I speak with about this? My book “Alien Harvest” is being ordered at this moment and will be available to ship the 26th.

An article about Chakeres Theatres in the March 4, 1939, issue of Motion Picture Herald said that “…the Chakeres organization took over Bell’s Opera House, with 750 seats, at Hillsboro, where it also recently opened the new Colony”

Status should be closed. A group has a page on Facebook trying to raise funds for rehabilitation.

Status should be demolished. The theater was demoed in late May/Early June 2017.

Here is an article about the pending demolition of the Colony Theatre, from The Times-Gazette of May 11, 2016. The building had deteriorated so badly that it was deemed unsalvageable, mostly as result of water damage from the long-unrepaired leaky roof.

The Colony opened in September, 1938. Chakeres Theatres deeded the property to the city in the 1990s, and the city turned it over to a non-profit organization. It was operated as a live performance venue, but with little success. In 2014, by which time deterioration of the structure was already well advanced, ownership reverted to the city.

The Times-Gazette has uploaded this short video to YouTube, showing a minute of the demolition of the theater’s auditorium.

Per Avery Applegate in April 2018:

I am starting work on the Colony Theater exhibit at the Highland House Museum, 151 East Main Street. We have a mural (actually, it’s called a bas-relief) and lots of memorabilia to put on display. I am searching for photos of the inside or outside of the theater. If you or have any photos showing the Colony that you would be willing to donate or loan (for scan) to the museum, please call me at 937 393-4345! Our opening night for the exhibit will be Friday, June 1st. Feel free to share this post!!!