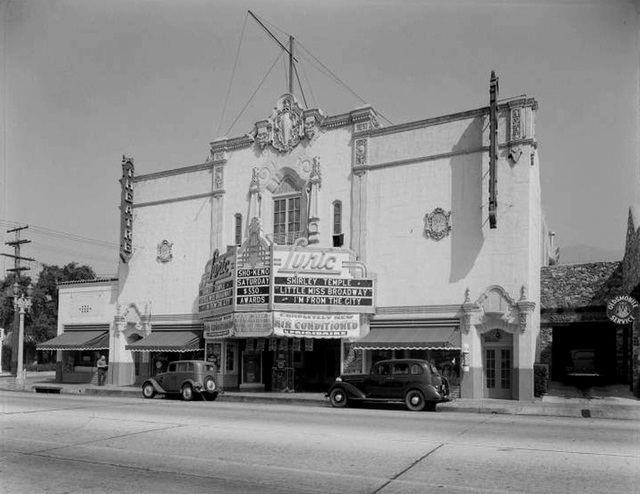 The Lyric Theatre was opened in 1925. It was equipped with a Wurlitzer theatre pipe organ. By June 1938 it was a district 2 Fox house. In 1962 it was taken over by Statewide Theatres and renamed Crest Theatre. It was demolished in September 1979.

Here is a larger version of the photo at the top of the page:
http://tinyurl.com/yqfzax

Here is part of a June 1974 article in the Pasadena Star-News:

The Duarte premiere of the X-rated movies “Deep Throat” and “The Devil in Miss Jones” has been met with the predictable outcry from several citizens and city officials. While the opening this week was well attended, so were gatherings of anti-pornography groups, who deluged city hall with complaints about the sexually explicit films being shown at the Buena Vista Cinema.

The theater is located next to Thrifty Drug Store in the Von’s Shopping Center at the corner of Buena Vista and Huntington Drive in Duarte. Management of the theater has recently changed hands, and the new operator has replaced “family” entertainment with the X-rated double bill. The previous operator was Winston Evans, who has moved his “family” film operation to the Crest Theatre in Monrovia, where the dust is settling from a fight by irate anti-smut forces against X-rated movies. The same double bill appeared at the Crest until the previous management gave up under pressure from city hall and police.

The manager of the Buena Vista Cinema denies any association with the former Crest operators, but declined to state the name of the new lease holder. When the Crest opened with “Throat” and “Devil” last month, Monrovia found reasons to close the theatre down. First it was closed for failure to comply with business license requirements and the manager was arrested. Later the Monrovia council passed an ordinance prohibiting the operation of an adult movie theater within 1,000 feet of a school, in this case, Clifton Middle School.

Constitutionality of the ordinance was questioned, but the theater managers backed off before the issue was settled by the council. The owners of the movie house announced they would lease the theater to Evans and cancel the showing of X-rated films.

The Lyric/Crest was demolished in September 1979. I have many photos of the demolition that my mother took while she watched them knock down the theatre from the Union gas station across the street. I used to work at the Crest Player Piano Shop that was in the theatre building at the corner of Ivy and Foothill. I also used to play and maintain the Wurlitzer 210 Special theatre pipe organ that was moved from the Lyric to the auditorium at Monrovia High school in 1937. The organ was not maintained for the past 15 years and it was heavily damaged by staff and students to the point that it could not be played. The organ was recently removed from the auditorium and used for parts.

The installation of the Wurlizter pipe organ at the Lyric was unique because it had 4 sets of swell shade shutters. The organ not only spoke into the auditorium, but it also spoke onto the stage. Jut Williams used to play the organ at the Lyric and he said that the sound of the organ was very rich because of the dual chamber openings, especially when the stage curtains were open. When the organ was moved to the high school in 1937, it was very muffled because they stacked the organ in the stage left chamber, with the solo chamber being completely buried by architecture. The organ was separated into 2 chambers (left and right) in 1957 (I think).

The Lyric Theatre Wurlitzer 210SP opus 1074 that was installed in the Monrovia High School was removed in August of 2009. Much of the manual chest pipe work was either badly damaged or missing , and the original relay and switch stack were gone by the time we removed the organ. The last time it played to my knoledge was somewhere between 1968 and 1970. If it played after that time I would be interested! In my opinion the organ was badly neglected , and its console was abused by carving Graffiti into its mahogany veneer. All of the organ that we could save is now in Northern California resting in storage , and will be restored and installed in a new home at a future date

Some of my first indoor move experiences where in that theater,
around 1963, I’ll never forget the nickel red-hot machine,after retrieving a handful from the dispensers opening, I immediately stuffed the whole amount into my mouth, and being a 6 year old with a mouthful of flaming red hots in distress I approached the candy counter moaning Awwwh pointing to my cheek, the 16 year-old perky counter-girl extended her palm, I shook my head no.. and used body language to the best of my ability to request a receptacle instead , but the counter girl insisted on the palm of her hand, but seeing the look on her face after depositing my suffering, I exited the lobby quickly and returned to my seat.

An article that mentions some history of the Lyric/Crest in Monrovia: View link

For those interested, The Lyric/Crest Theatre, Wurlitzer Theatre Organ is currently under restoration and installation into the Ohlone College Jackson Theatre in Fremont California. Thanks to clifluscher and a team of dedicated volunteers. Though separated from the mostly destroyed console, will come together as a 230 special (piano and posthorn added) with any luck By Fall 2016

Great news about the theater organ!

Boxoffice, Nov. 5, 1962: “Fred Stein’s Statewide Theatres has refurnished the Lyric Theatre, Monrovia. The new edifice will then be renamed the Crest”