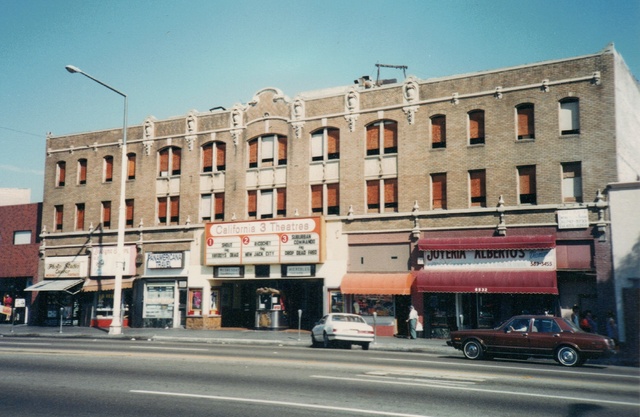 Opened on November 26, 1925. The former Fox California Theatre was triplexed on September 1, 1976. The lobby has the same gold mural that is inside the lobby of the Village Theatre in Westwood.

I drove by there last week, and the sign says California 2 Theatres. I guess they lost a screen sometime in the past few months.

If they’ve altered signage while the place is closed, that suggests a possible re-opening, doesn’t it? Otherwise, why bother making the change?

The county assessor’s office treats this as 6524 S.Pacific, but it’s definitely the same property. The year of construction was 1925, which matches with the item in Southwest Builder & Contractor issue of January 4, 1924, which said that architects Arthur George Lindley and Charles R. Selkirk were preparing plans for the theatre.

Lindley & Selkirk were best known for designing churches, but there are two other theatres which can be attributed to them. They did the original Egyptian-style design for the Alexander Theatre in Glendale, and they were the architects of the Glendale Masonic Temple, which includes the Temple Theatre. Not a bad rÃ©sumÃ©.

The site should add to the aka California 3 Theatre since it operated and advertised under that name.

I was a doorman at this theater in 1951. Mr. Bradley was the manager and his daughter ran the candy counter. It was in the process of being remodeled. Up the street was the Warner’s theater.

Oh, I should say that it was a single theater with a very large balcony. After the remodeling project it became a typical Fox designed theatre. A very large stage. We changed into our work uniforms downstairs under the stage which had a large hallway with dressing rooms.

The building had a fire on 2/24/20, which appears in the Google current street view. The Los Angeles Theatres blogspot website has additional vintage photos and of the fire, but it won’t link here because CT reads it as Spam.