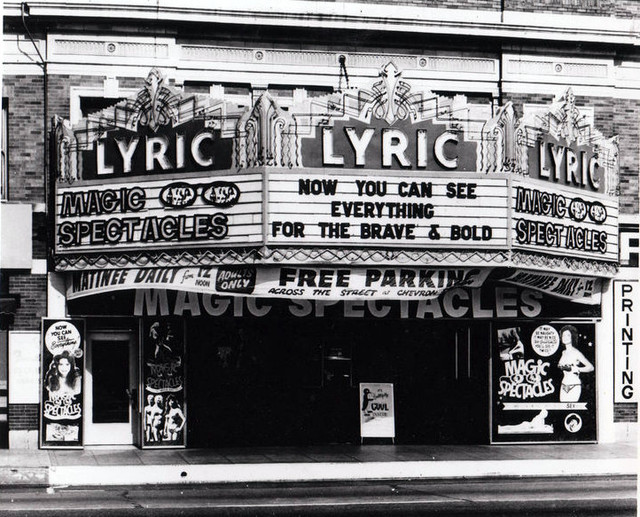 Opened in June 1922, the Lyric Theatre was later a district 4 Fox house. Frome 1961 it finished its final days as a Pussycat Theatre.

Here is an August 1960 ad from the Long Beach Independent:
http://tinyurl.com/nzojb3

I went to Pacific Boulevard Elementary School in the early ‘70s and this theatre was on the route to and from school.

So were the California and Park theatres.

The building looks like it’s still standing – on GoogleMaps you can clearly see where the roll-up door was the entrance.

Southwest Builder & Contractor of May 27, 1921, said that the plans for this theater were being prepared by Walnut Park architect A.H. McCulloh.

Yes, it looks like the building is still standing from the overhead shots of the building.

The June 22 article that OCRon uploaded confirms A. H. McCulloh as the architect of the Lyric Theatre. The June 25 article says that the theater was decorated in the Egyptian style, but also says that the Lyric was a “copy” of Grauman’s Million Dollar, and that house was not Egyptian at all.

The unusual spelling of the architect’s surname, McCulloh, appears to be correct, as it is spelled that way in several trade journal items from 1921 and 1922. I can find only one instance of a Los Angeles architect called A. H. McCollough, that being from 1913, and that might not even be the same guy.

Whatever the lobby is being used for, it appears that the auditorium has been reconfigured for use as a wedding chapel and associated reception rooms. The entrance to the Guadalupe Wedding Chapel is around the corner on Florence Avenue.

Switched to adult programming in 1961.