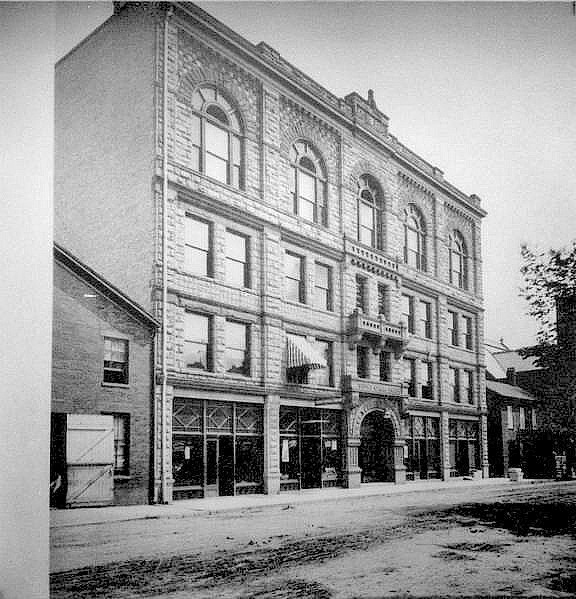 Opened on September 12, 1891 with the opera “The Little Tycoon”, the Sorg Opera House is one of the oldest surviving performing arts theatres in the state and country. It offers excellent sight-lines and accoustics.

A 1,200 seat capacity was acheived by providing 520 in the orchestra level, 240 in the 1st balcony and 440 in the 2nd balcony. The upper balcony has been closed since the 1940’s. I hope to see it restored one day in the near future.

It is a proscenium theatre with a stage house and fly loft, which made it far more versatile than the standard "box" theatre with roll-up scenery. It was remodeled as the Colonial Theatre in the 1940’s to accomodate movies only. The upper balcony was closed and a false ceiling added to reduce the reverb from the excellent accoustics. The projection booth is on the upper balcony, and a cut-out provided in the false ceiling so the picture can reach the stage. Basically, the theatre is historically authentic to 1891.

Based on what I’m reading here, I may have been the last exhibitior to rent the Sorg in 1986. I operated the theatre only for about 4 months. I reopened the theatre with GONE WITH THE WIND for a invitational night for the Friends of the Sorg, a group dedicated to protecting and preserving the theater. The Sorg was known as the Colonial at that time and so to honor the group I operated the theatre as the Sorg Colonial. The projection booth had 35mm RCA projectors with Brenkert carbon arc lamphouses with tube type amps for magnetic sound. I upgraded the booth with xenon lighting, automation, an Eprad double mutt film transport system a Dolby stereo processor. stereo.

The projection booth was located at the top of the 2nd balcony which was equipped with benches with an outside entry and box office for patrons of color in days long gone by. The stage was complete for live entertainment as it was when it opened. The stage front wasn’t that wide and any CinemaScope movies were shown with the masking reducing the size of the screen. The theatre was beautifully maintained at the time and restoration would have been minimal. I tried several programing methods including discount subrun and art films and couldn’t make a go of it. Competition was tough for a single screen. I closed the theatre in July of 1986.

I would love anything I could find on the Opera House. I love this place and work here with it now, I have so many things I want to do here if only money grew on trees.Ha Ha. But I have fallen in love so I have goals and dreams. I would have love to have seen Gone With The Wind here. I would also like to see the friends of the Sorg back in place again. This is a great place for our community.

The exterior has some ugly blue corrogated metal siding on the adjacent storefronts, and the rest of the front is dark from years of pollution. Badly needs a restoration but otherwise looks structurally sound and original. If restored, it would look fantastic!

According to an article (http://www.middletownusa.com/view_news.asp?a=4561), it switched to movies in 1915 and back to stage in 1985. The second balcony was hidden above the false ceiling (not sure when this happened). No web page listed and they don’t indicate what their uusual events are but in summer 2009 they had a two-week period of classic movies.

The Sorg Opera House is listed under Middletown in the Ohio section of the 1897-98 edition of the Julius Cahn Official Theatrical Guide. Managed by Dechant and Walburg, 1,400 seats, ticket prices 25 cents to $1. The house was on the ground floor and had both gas and electric illimination. 9 musicians in the house orchestra. The proscenium opening was 34 feet square, and the stage was 37 feet deep. There were 5 newspapers; hotels for show folk were the Arlington, United States, City, Romneel House, and Broadway. The 1897 poopulation of Middletown was 10,000.

http://youtu.be/GnW1QfUOaUo
Above is an url to a video I posted on YouTube from photos and video I took of the Sorg in 1990.

The MidPointe Library has a few photos of the Sorg Opera House/Colonial Theatre. Unfortunately, none show the interior.

This photo shows the building around 1950, shortly after it had been remodeled and renamed the Colonial Theatre.

Somewhat clearer is this 1975 photo which shows more of the facade’s Romanesque Revival details.

I recently photographed the Sorg Opera House. Check out some photos and a short write up at: After the Final Curtain

Also, status should be open. It reopened in the fall of 2017.