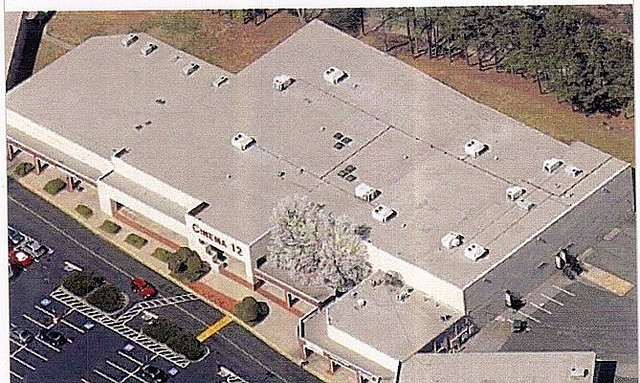 Built by the O'neil Theatre Company in a space formerly occupied by retail stores in what was then known as Loehmann’s Plaza, this venue was solely a second run operation from its inception when it opened October 12, 1990 with 12-screens. The Northeast Plaza was a fairly decent place to catch flick after it had ran its course at either the Lenox or the Phipps. It was closed in 1999 and became a nightclub.

In 2019 it was purchased by NCG Cinemas and following renovations it reopened as an 11-screen movie theatre on June 4, 2020.

I have been into this place as the Atlanta Peach Ballroom, and It still looks like a movie theater. The club has several different floors with different music. My guess is the theater sound helps the club. My favorite part of the club is that the bathrooms are in the front of the club just like a theater.

We used to call it the “Cohoes” Theater, after that chain of discount department stores, because it was the anchor at Northeast Plaza for a few years. The theater itself was nice and an easy place to catch a film for half price. Northeast Plaza has undergone so many changes. Originally it was a small, suburban strip mall with a Kroger and another grocery as anchors, a wig shop, drug store and a bowling alley. I thought the other food store was Colonial, but recently found out that my memory had failed me, so it may have been an A&P or a Winn Dixie.

Saw many movies here after a trip to the local Paper Chase where I bought movie posters. The strip mall was kind of crappy, but the theater was ok.

This is a good thing for Northeast Plaza. The old O'Neil conversion from retail was overall pretty good for the time and I believe did good business until they went bankrupt. I was always under the impression that they were doing OK with this location, the one they ran in Gwinnett and the old one they put on the top floor of the old Columbia Mall Davidson’s. I think they were just a small company caught up in the wave of bankruptcies while everybody was trying to outspend each other.

Opened with(on different screens), a Donald Duck cartoon(Dude Duck) and “Ducktales the movie”(same screen), “Back to the future 3”, “Total recall”, “Gremlins 2”, The adventures of Ford Fairlane", “The jungle book”, The freshman", “Navy seals”, “Another 48 hours”, “Quick change”, “Bird on a wire” and “Pretty woman”.

Despite a generally poor outlook for movie theaters, last fall NCG started work converting the old O’Neal Northeast Plaza purpose built discount theater and later nightclub into a modern state of the art cinema. Then the pandemic and shutdown hit. Then the uncertainty over how theaters would manage to operate in the new normal known as “distancing.” Now the civil unrest of the past week. Not to be discouraged, the theater is due for a grand re-opening Thursday 6/4 at 1pm.

My 42 year movie theater career ended in 2012 with the conversion of my final theater employer to digital projection. So, no more booth work for me. Nor would I be interested in resuming theater management which I did for my first 10 years in these days where the point of the movie is to get people inside to buy beer, wine, food and traditional theater snacks. However I respect anyone willing to open a new business these days, especially a movie theater. Good luck to you.

Two current photos added. Guess it is time to change the name to NCG Brookhaven.