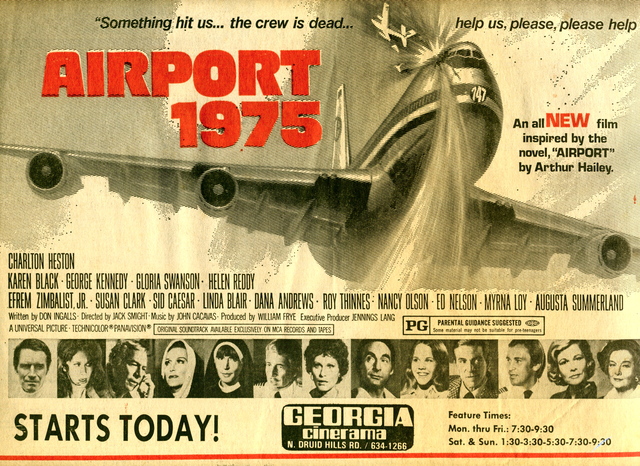 The Martin’s Georgia Cinerama was the last Cinerama to be built in the Metro Atlanta area although there was some controversy as to if it was a “true” Cinerama, since it used single, as opposed to triple projection. Really great theatre just the same with 1,000-seats, a giant curved screen, 70mm projection and a quadrasonic sound system that just blew you away. It opened April 14, 1965 with Max von Sydow in “The Greatest Story Ever Told”.

Unfortunately on May 28, 1976 it was carved up into two flat screen auditoriums. Since the theatre was built for Cinerama, it did not transition very well into a twin. The seating would cause a crick in either the left or right of the neck (depending on which of the two auditorium you were in) due to the screens not being in alignment with the seats.

The Cinema & Drafthouse group made a go with the theatre after Martin left and returned it back to a one screener albeit not Cinerama. Within year it was twinned again then went dark a short time thereafter. It became the First Metropolitan Community Church and was later used for storage. It has since been demolished.

Thanks Raymond for that quick reply. I am sure the space for the Martin offices was created during the twinning. I saw a lot of movies in the original theater. Since the lot in front was pretty small we usually ended up parking on the side and thus left through the front side doors. I remember that they were set back a few rows from the screen. It looks as if the offices took up all of the area between the doors and the back of the building. Also, they lost over 100 seats during the twinning so that would indicate that they moved the screens forward.

I was only in the auditorium once prior to the butchering and that was a long time ago. The offices were small as I remember, when you went into the back door there was a narrow stairway to the second floor. Martin liked to use plans over and over again, I wonder did they use this plan elsewhere to compare it to? I know I have seen another theater with a similar shaped footprint somewhere in the southeast, but can seem to recall where.

Rstewart: Martin did have at least one theater designed by Brookbank, Murphy & Shields, the successors to the firm that designed the Georgia Cinerama. It’s the only one I’ve identified so far, being the Madison Theatre in Nashville, which doesn’t look much like the Georgia house. Chains tend to stay with the same architects for many projects, though, so it’s entirely possible that there is a near-twin to the Martin Cinerama out there somewhere.

Martin built a ton of twins and triples in the 70’s similar to the Martin Theatre in Talladega, AL, the southeast was virtually littered with them. They were never bashful about reusing a design. I have a recollection of another theater somewhere that had both the distinctive ribbed walls and overall shape as the Cinerama, but can’t put my finger on it. I keep trying to think of another area that would have had similar demographics in that time frame that would have supported a house of this size in their market. Perhaps another regular will have some suggestions.

Not a Martin, but I always thought Loew’s Tara, built 3 years later looked a lot like this one with vertical running lights added. The Georgia was built in the center of a parking lot so it was easy to see the entire theater which had a finished look all the way around. Tara backed up to a service alley and was not finished in the back. From the front they looked similar although inside they were very different.

Another Martin design, the downtown Rialto, has an almost identical twin, or did until a couple of years ago. The Ziegfeld in NYC, built by Walter Reade in 1968, is almost an exact duplicate of the Rialto.

I agree about the Tara, but it isn’t quite as rounded as the Cinerama, otherwise the resemblance is remarkable. When I moved to Northern NJ a visit to the Zeigfeld was a must. I don’t even recall what we saw, I was busy checking out the theater, it was a spot on for the Rialto except it wasn’t rough and threadbare. A shame it was gutted, but NYC property is what it is.

Well, you can certainly add the tag “demolished” to the header as there is nothing left but a concrete slab. I have posted a couple of pictures to the photo section. One of them shows the site of the lobby.

This theater was built by Martin in 1964 in the living room style of the mid 60’s when there was a lot less neon and more character involved. The original name was Georgia Cinerama. In the foreground of the lobby picture you can see the map of Georgia that was inlaid into the tile floor between the doorman’s position and the concession stand. I remember this from my movie going days but had forgotten about it. By the time I worked here it had been twinned and the lobby, in addition to having another set of rest rooms installed, had been carpeted.

Lots of good movie going memories here for me during the single screen days, starting with Patton in the summer of 1970. Some of the others I can recall were Tora, Tora, Tora, Andromeda Strain, Mary Queen of Scots, Frenzy, Jesus Christ Superstar, The Sting, Airport 75, Front Page, and probably others. Although I looked inside many times, I don’t recall ever actually watching a movie here after it was twinned. Terrible presentation with tiny screens, keystoned projection, seats still in their original curved rows so they didn’t really face the new screens…..I could go on and on, even more than I already have.

It’s a shame to see it gone. I’ve always wondered why this location was such a poor performer when the Tara, being of the same time frame, size and area has managed to flourish despite similar modifications over the years. It’s not like Loews was particularly good to the Tara or their other locations in the 70’s.

Under the Cinerama banner, the theatre had a seating capacity of 1,000 which was greatly reduced during the “twining”.