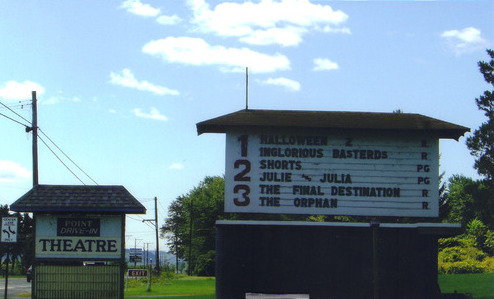 Opened as the Arrow Drive-In in June 25, 1952 with John Wayne in “Flying Leathernecks”. It was closed in 1956. On April 27, 1957 it reopened as the Point Drive-In. In the 1960’s it was operated by Comerford Theatres chain. By 1993, it was operating with 3-screens and is one of the few remaining drive-in theatres to maintain three screens.

Every Halloween, there is a Horror Fest show showing four back-to-back films on one screen (including black and white classics on certain weekends). There is a small haunted house for patrons to tour at their leisure, and the staff even creeps around scaring the viewers in their cars.

This drive-in opened as the Arrown Drive-In in 1954, it became the Point Drive-In in 1958. Opened as a single screen drive-in. The website is no longer an active website. They only have a facebook page. It is listed as the Point 3 Drive-In. Open seasonally April thru September. 600 car capacity and has made the conversion to digital projection. Facebook page

If anyone is interested, I found some interesting information about the history of the theater (plus photos from our visit!!) –

June 21, 1952 article in Billboad indicates that the Arrow Drive-In in Danville, PA, has been recently opened.

Great history info, Tine263! Thanks for sharing that and the photos! You all should go read the post, which includes info from David Renn, who “is the current owner and has been for the past 27 years” as of September 2015. Which would put his start at 1988 or 1989, which is just a little off from an article I found.

From the Winter 2005-2006 issue of Spectrum magazine, hosted at Archive.org:

The Point Drive-In, on Route 11 near Danville, was one theater to screen adult films.

“There was very low overhead,” says Dave Renn, manager (sic) of the Point. “They needed only one person to run the projector and one for the concession stand – people rarely got out of their cars.”

After about 15 years of screening adult films, the theater abandoned the practice following the 1987 season. “Figures were really good for it [pornographic films],” says Mike Danchak, who managed the Point when the change was made. “The problem was video was taking over,” he says.

… After the “X”-rated era ended, Danchak and owner Joe Farruggio transformed the Point from single to triple screen and added FM stereophonic sound. Danchak says (garbled) to return to a family-friendly environment, something Renn has maintained since taking over in 1990.

… “We tried a flea market a couple of years ago,” Renn says, “but it didn’t work out because the summers were so hot and dry.”

As NYozoner implied, the June 21, 1952 issue of Billboard wrote “Harold E. Bell opened his new 250-car Arrow Drive-In near Danville, Pa.” So the true opening date was probably at least a week or two earlier. On Sept. 13, 1952, Billboard noted “New high-intensity lamps were installed at the Arrow Drive-In, Danville, Pa.” so maybe they were needed to expand the viewing field?

In the 1980-88 MPAs, the Point was listed in Northumberland, owned by Sports Serv, apparently Farruggio’s company.

An October 1, 1957 ad (Hazleton Standard-Sentinel) for the cinematic masterpiece Walk Into Hell mentioned the Point Drive-In in Danville.

An April 2000 article in that paper said Renn was opening a Sunday flea market at the Motor-Vu Drive-In at Nescopeck. “Renn also operates the Point Drive-In, Danville, and features a flea market every Sunday.”

This opened as the Arrow Drive-In on June 26th, 1952 and closed in 1956 It reopened as the Point Drive-In by Comerford Theatres on April 27th, 1957. Both grand opening ads in the photo section. 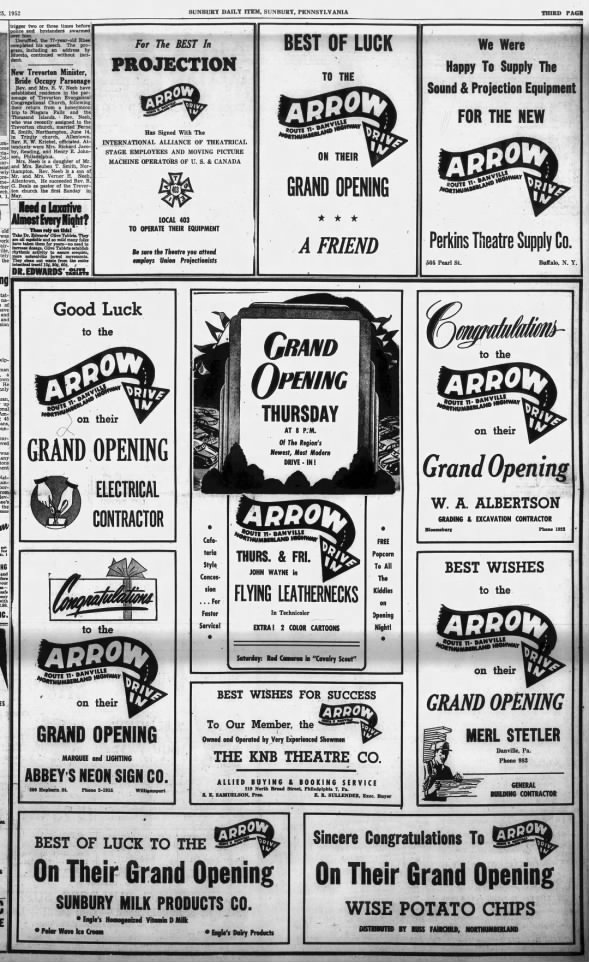