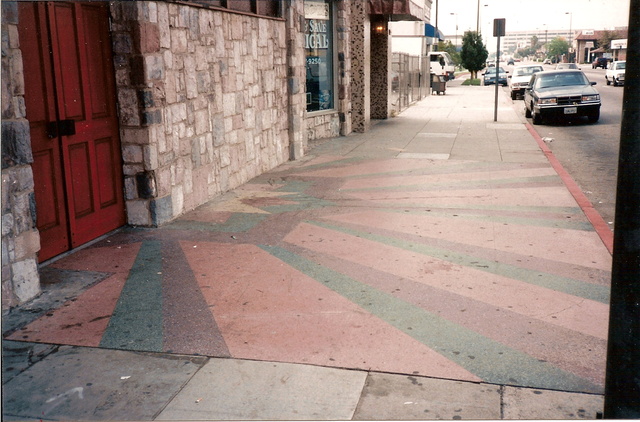 Bard’s Glen Theatre opened in the 1920’s by the L. Lou Bard chain Far West Theatres Inc. It was located on E. Colorado Street between S. Adams Street and the site of the original Bob’s Big Boy restaurant and drive-in. It was later operated by Fox West Coast Theatres.

It was still open in 1956, but had closed by 1957. It was converted into a bowling alley. The former movie house now houses a restaurant and nightclub.

Bard’s Glendale was opened in 1925. The architect was Kenneth A. Gordon, who also designed Warner’s Egyptian Theatre in Pasadena (later called the Uptown.) The owner of the theater building, who leased it to the Bard Circuit, was M.G. Khodigian. The construction firm was J.H. Woodworth & Son, whose offices were at 200 E. Colorado Street, Pasadena.

Incidentally, although I never attended a movie here, I remember seeing the Glen Theatre listed in the L.A. Times' movie section for many years. At no time do I recall it being called the “Villa Glen.” I am wondering if some mistake has been made here. Please note the comment by user barton, above. Could it be that the names of two different theaters have been conflated?

Also the narrative in the listing mention it closed in the fifties, but there is a post above saying they saw Bonnie and Clyde here???

I noticed that discrepancy. I’m fairly sure that the theater was still operating in the 1960s. Also, while the street is called Colorado Boulevard in Pasadena and in the Eagle Rock district of Los Angleles, it is still called Colorado Street in the City of Glendale.

I have found a listing for the Villa Glen theater at 404 North Central Avenue in Glendale, from the Independent theater listings in the Los Angles Times of February 10th, 1971. They were showing a double feature of movies called “Flap” and “Hotel.” That issue of The Times contains no listing for any theater on Colorado Street, so the Glen was undoubtedly closed by then.

I am more certain than ever that the theater on Colorado Street, designed by Kenneth A. Gordon, opened in 1925, and first operated by Lou Bard, was never called the Villa Glen, but only Bard’s Glen and, later, simply the Glen. We are definitely dealing with two different theaters here. Because of this, I don’t know if the comment by DanMorse above applies to this theater, or to the actual Villa Glen on Central Avenue, mentioned in the comment by barton. That he saw “Bonnie and Clyde” at the Villa Glen on Central Avenue seems more likely.

In any case, there should be two seperate listings for these two distinct theaters.

If the information at Terraserver is accurate, The Glen had not been demolished as of 29 March, 2004. A search on the address 1014 E. Colorado Street, Glendale, provides a link titled “Urban Areas 3/29/2004” which produces a good aerial photo of the location on that date.

The little red arrow intended to mark the address on the photo is displaced two doors to the west, but it is possible to clearly see the Glen Theatre building, and the shadows of the two distinctive towers shown in the photo of the facade on this post. Unless the Glen has been demolished within the last nine months, it is still there, and ought to be listed as closed. If someone in the Glendale area could check the building in person, this could be confirmed.

I stopped by and actually got into the Glen Theatre on my recent visit to CA (January 2005). It was a Sunday morning (being toured around LA theatres by Jeff Arrellano) and there was a side door open, the cleaners allowed us to take a look inside. Nothing of it’s orginal internal decoration survives now (probably lost when it became a bowling alley). Its current use is; Leonardo’s Restaurant and Nite Club.

Ken, I’m wondering if the interior looks as though it has been stripped down to the bare walls, or if the original decoration was merely covered up, as was a common practice with remodelings done in the 1950s? I remember that when the Garfield Theatre in Alhambra was remodeled, about 1960, the faux stone of the side walls was merely covered over with some sort of plasterboard. (Unfortunately, the installation of a CinemaScope screen a few years earlier had already led to the destruction of the once-grand proscenium wall of the Garfield. If the Glen did close early enough in the ‘50s, it’s possible that it never had a CinemaScope screen installed, and if the walls were merely covered over, the proscenium wall decoration might still be there.) I know that when the Academy in Pasadena was multiplexed in the early 1980s, it was discovered that much of the old decoration from the Bard’s Colorado era still existed under the false walls installed for the mid-1950s makeover.

In any case, it’s nice to know that the building, at least, is still there.

I lived a couple of blocks from this theater in the early 70s. At that time, however, it was a country and western bar. I went in there a few times. Can’t remember the name. It stayed for about four or five years, closed and then re-opened as another nightclub with Latin music.

P.S.—Very sharp of Joe Vogel to point out that it’s Colorado Street in Glendale and Colorado Boulevard in Pasadena. It seemed not even Glendale residents knew that.

It’s really small, but you can barely make it out in this 1965 photo, past Bob’s, between the heads of the two guys on the right. It still has a marquee.
View link

I took some photos today, including a Then-And-Now version: