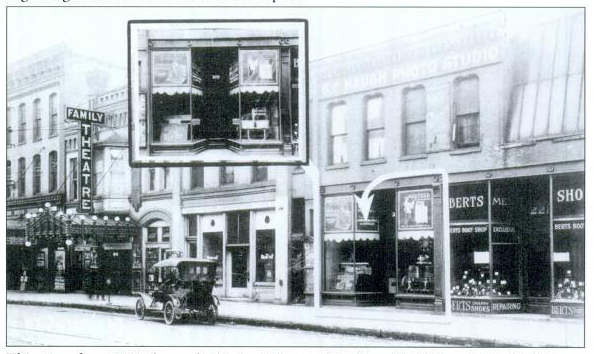 The Family Theatre was operating prior to 1913. It was remodelled in 1916 to the plans of architectural firm Clausen & Kruse. It was renamed State Theatre in 1933, and operated until at least 1950.

The Family Theatre was in operation at 215 Third Street by 1913, when it was mentioned in at least two issues of The Moving Picture World. A brief item in the August 21, 1915, issue of the same publication said that the Family Theatre was being remodeled into “…first class motion picture house….” at a cost of $10,000, and would be expanded to seat over 700 patrons. It was scheduled to reopen that month.

At some point, the American Theatre at 324 W. Third Street, which had been in operation since before 1910, was renamed the Family Theatre.

Page 40 of Davenport, by Doug Smith (Google Books preview), features a 1920 photo of the Family Theatre at 215 West Third Street, so the name change from Family to State Theatre could have taken place no earlier than that year.

The March 6, 1915, issue of The Construction News said that Davenport architectural firm Clausen & Cruse had been hired to draw plans for the expansion and remodeling of the Family Theatre.

I’ve found references to the Family Theatre at this address as late as 1928.

Architect Frederick George Clausen retired in 1914, whereupon his son Rudolph J. Clausen formed the firm of Clausen & Kruse with Walter O. Kruse, so the 1916 remodeling of the Family Theatre should be attributed to Rudolph.

However, as the elder Clausen was Davenport’s leading architect, it’s quite possible that he was the original architect of the house.