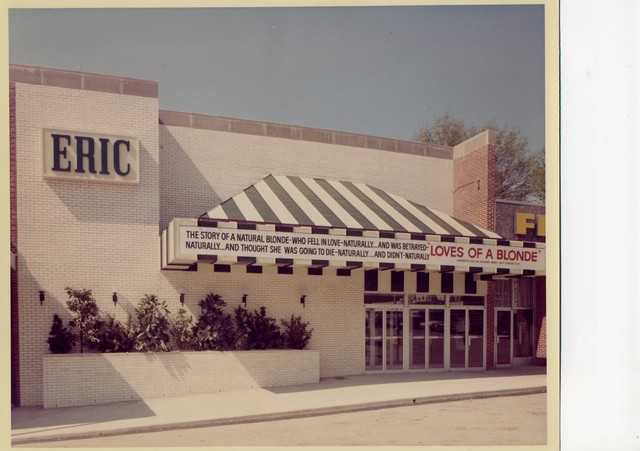 The Sameric Corporation opened the single screen Eric Wynnewood Theater in the Wynmore Shopping Center in Philadelphia’s affluent Main Line suburb of Wynnewood on April 5, 1967. The opening movie was the Royal Shakespeare Company’s presentation of Peter Brooks' “The Persecution and Assassination of Jean-Paul Marat as Performed by the Inmates of the Asylum at Charenton Under the Direction of the Marquis de Sade”. Tickets for the first movie cost $2.25 for weekday evenings and $2.50 for weekend nights.

The theater had 600 seats and a 37 by 18 foot movie screen. Below the ticket booth were two handprints of Eric Shapiro, the Sameric Corporation founder’s grandson. Although the Wynnewood opened with an arthouse film, it showed mainstream films, too.

The auditorium’s décor was relatively plain. The metal walls and upholstering rocking chairs were teal in color.

After Sameric Corp sold their theaters to United Artists, UA continued to operate the theater. UA ceased opening and closing movies with the red curtain in 1995 and showed slides instead. The Wynnewood closed June 4, 1999 and the space became an Italian restaurant. As a restaurant, it opened as Vinny’s T. In late-2010, it became Buca di Beppo until closing in January 2013. It has since become a pediatric clinic.

There is a photo of the former theater on the restaurant’s website:
http://tinyurl.com/yrwxe7

Thanks for finding photo of Vinny T’s of Boston restaurant.

There’s a photo from 1991 of the exterior of the theater here, when it was still showing movies:
http://www.cinematour.com/tour/us/7058.html

Among the films I recalled seeing at the Wynnewood was Being There. Shortly afterwards, Peter Sellers took very ill, and I hoped so he would recover, but he passed away.

Later, I saw at the Wynnewood in 1994 The Shawshank Redemption and Bullets over Broadway. In 1995 I saw Circle of Friends and The American President. In 1998, I saw Apt Pupil, and in 1999 Blast from the Past and Analyze This. It was always fun to enjoy movies at this single screen movie theater.

I ran this theatre in 1991 when that photo (above link) was taken. I even hung those letters on the marquee myself! What a cozy theatre it was, excellent place to see a show despite its cramped quarters. The funniest thing is that the box office door was in a tiny inner hallway leading to the ladies room, so trying to get change money to the cashier was a comedy as I ran into women trying to exit the restroom, thinking I was there by mistake! And when I got a print of Terminator 2 a couple days early, I invited the manager of Barclay Square over for a midnight test run, and he in turn invited Charles Barkley who was still with the Philadelphia Sixers at the time.

I’ve placed a photo in the photo galley.

I worked there briefly as manager in 1983, like 1 night and realized I got myself in way over my head. LOL They were showing Return of The Jedi than.