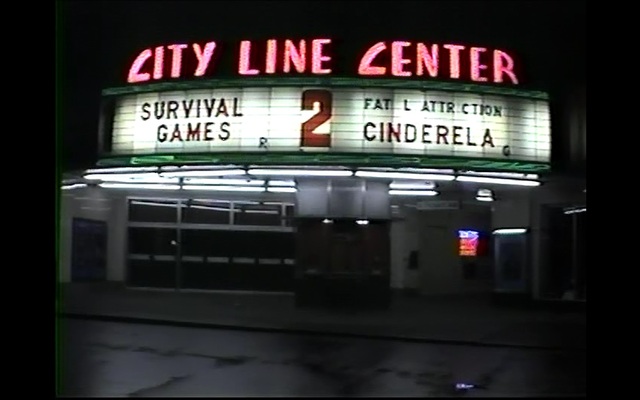 Opened on August 31, 1949, the City Line Center Theatre was in the Overbrook Park neighborhood of Philadelphia, as part of a strip mall, City Line Center, which had a 12 acre tract, that also included 24 retail stores including supermarkets, and a huge 1,000 capacity parking lot.

The strip mall was developed by the Suburban Company that in 1930 built another nearby, outdoor mall, Suburban Square in Ardmore, PA, and in 1937 opened the Suburban Theatre.

The City Line Center Theatre was designed by Philadelphia theatre architect William H. Lee, whose theatre designs in the nearby western suburbs included the Anthony Wayne, Bryn Mawr, Narberth, and Suburban theatres. The movie operator was Fried Theatres, which had offices in 1950 at the Suburban Theatre, but by 1969 had relocated offices to the City Line Center.

The City Line Center Theatre was known as the City Line Center and was Art Moderne in style. An outside forecourt had a stand alone ticket booth. A huge circular marquee greeted patrons. All 1,530 seats were on a single sloping floor, with the projection suite overhanging the rear five rows. The original, curtained screen was 28.6 feet wide and 21.3 feet tall. There was a stage, an ushers room, and a posters room. In the 1950’s, the front of the vast auditorium was adjusted to install a curtained, huge, wide movie screen for CinemaScope movies.

In 1973 or 1974, movie operation was turned over to local Philadelphia movie theatre chain Budco, which twinned the auditorium. Budco was purchased by AMC, which continued to show mainstream movies. In 1990 or 1991, the theatre closed and was gutted, including removal of the ticket booth, marquee, and exterior forecourt, and became a TJ Maxx retail store. For years afterwards, the wording City Line Center was seen on the exterior wall of the auditorium, before being painted over.

Kevanos, thank you for the improvement! I had noticed the recent prior link didn’t hold up well on HD computer. This is so much better. I saw an image of the larger auditorium 1 screen. To show scope films did it expand left & right or was it narrowed from top & bottom from masking? Can you estimate the screen’s height & how wide (at its widest, for a scope film)? I’d welcome a screenshot of that screen & auditorium. Other than the screen, it is very nice to see all the other details in the improved video.

Yes Howard and Mike, that is correct. I don’t remember exactly how they were controlled. I vaguely remember a box on the left side of the projection booth by the breaker panel, with switches on it.

On this YouTube link https://www.youtube.com/watch?v=MNnfu4uwCco I have posted some of the raw footage with ambient sound. One of the shots is the full tracking shot from lobby to screen. I will also try to post a screen grab of the full screen.

the seats might be original when they twinned the ardmore in the 70s they used the seats from the 1965 renovations. now seeing this theatre was built in 1949 they probably looked like ardmore pilgrim gardens as well as the replaced brookline seats from 1960s and the wynnewood seats.

i have a video you can see on facebook that honors the memory of our local suburb theatres an the majestic philly theatres no longer with us. please check it out

hi mike and hdtv if your a member of the vintage 69th st or you know you’re from broomall or growin up havertown you will see there.

Looking at the footage that I have from House 1, I believe that some sections (closer to the back of the theater) had older seats while other sections had slightly newer seats. This would make sense because the seats in the back would get less use and thus last longer. The older seats resemble the seats that can be seen in the older pictures of the untwinned theater.

Howard, I posted a couple of diagrams of the theater from both the original and twinned layouts. These are based on an analysis of Google Satellite images, photographs and my memories. I remember people mentioning that the theater had an “Usher Room” and I think that it was near the front of the theater, probably by the screen. Do you know exactly where it was?

Thanks, Kevanos for the diagrams & all your documentation! I don’t know re usher room. I was a child, but recall the stage, the screen, the huge seating capacity, the popcorn machine next to the auditorium doors as there was a walk back to the lobby with concessions, and of course, lasting long after I was inside, the ticket booth and the passage with movie posters that led to the theater’s back.