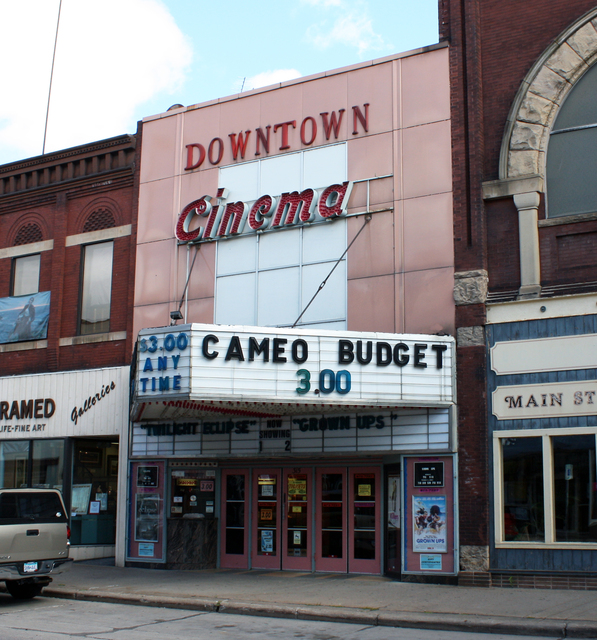 It was built in 1945 by Minnesota Amusement Company the owners of the other theatres in Eau Claire at that time, (State Theatre, O'Klare Theater, Badger Theatre) The Hollywood Theatre was under construction at that time also, it was being built by Sheldon Grengs. To my knowledge, MN Amusement Co. put up the Cameo in hopes of keeping the Grengs family from completing construction of the Hollywood. The plan didn’t work out, the Hollywood construction was completed and opened. The Cameo was open until 1951 then closed until 1966, when Gene Grengs, Sheldon Grengs son re opened it as the Cinema 1 theatre in 1966. It ran as a first run theatre til 1992, then closed for a year and re-opened as a Budget theatre in October 1993. It was called the Cameo Budget Theatre until Sept 2010 when Micon Cinemas of Chippewa Falls purchased the Grengs Theatres and re-named it the “Downtown Cinema. I know a lot of Eau Claire theatre history, as I have worked at them since 1976, and done extensive research.

The Cameo was indeed constructed in 1945 but wartime shortages of materials led to the theatre’s delay finally opening on Christmas Day 1946 with the banner “Our Christmas gift to Eau Claire.” The MIndako Circuit is credited as the first operator of the theatre on that day.

Eau Claire’s own downtown budget theater celebrates its grand re-opening tonight with more than a few changes to show for its extensive remodeling. At the Micon Cinemas Downtown Budget Cinema and Marquee Restaurant, all of the films have now gone digital, a 50-seat screening room was added to the second level, and a restaurant now serves food and beverages to moviegoers. In addition to the theater’s high quality popcorn, the restaurant will serve pizza, sandwiches, flatbread, pulled pork, and alcoholic beverages like beer and wine. While alcohol will be served, the owners say it is a secondary focus to the restaurant, and the theater is still a great family experience. The concessions stand at the newly re-opened theater. The new concessions stand. The owners, Mike and Connie Olson of Micon Cinemas, intend to use these changes, along with a slight rebranding, to bring more independant, rare and award-winning films to the culture of downtown Eau Claire. With the new upstairs screening room, they’re planning events like a Saturday morning cartoon block, private showings, and maybe even a film festival. Above all, they want give people more reasons to spend a night out at the movies. Tickets will still cost $4/adult and $3/child (Tues. $3/$2). Tonight they’ll be showing the academy award winner for best animated picture Big Hero Six [PG], a family-friendly, action adventure and the winner for best picture Birdman: Or the Unexpected Virtue of Ignorance [R], a comedy-drama. This seems like an incredible investment in the culture and future of downtown Eau Claire and this moviegoer intends to be a frequent patron. Head to Miconcinemas.com for showtimes and to learn more. The theater is located at 315 S. Barstow St.

movieman457: I appreciate your information. I worked as a part-time usher for MN Amusement at the STATE a few years around 1957. I got 70 cents an hour and usually had 13 hours a week. Congress raised the minimum wage to $1.05 about 1958. One of the full-time ushers, Ron, bought a 53 BUICK and married the popcorn girl.

Floyd Nutting was our manager. He had me trained to repair seat cushions. I got 35 cents each. If I hustled I could do four an hour. I also set the marquee which in those days changed twice a week: an A picture Thur-Sun and then a B picture the rest of the week.

We had “South Pacific” and Godzilla" and a few 3D flicks.
It was my first job in show business.