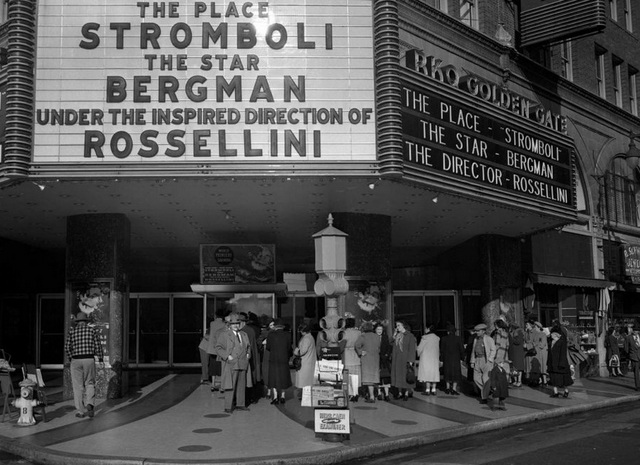 The RKO Golden Gate Theatre had a ‘sister’ theatre in Los Angeles the RKO Hillstreet Theatre of 1922.

The Golden Gate Theatre was opened on March 26, 1922 with vaudeville on the stage and Wanda Hawley in “Too Much Wife” on the screen. Seating 2,800 in orchestra and balcony levels, it was equipped with a Wurlitzer 3 manual, 13 ranks theatre pipe organ. It was a movie theatre for over 50 years until it closed in the 1970’s. By the time it was shuttered, the Golden Gate Theatre had already been converted into a two screen theatre on December 21, 1966, with the balcony theatre known as the Penthouse Theatre, opening with Jean-Paul Belmondo in “Is Paris Burning”. With the twinning it suffered little permanent damage as it was later restored to a single auditorium by the Shorenstein Hayes Nederlander group.

When it was finally renovated and reopened in 1979 into a performing arts center, the original detail and look of the theatre was restored as well. Although the neighborhood has remained a little seedy, the theatre is still very grand, with two marvelous Art Deco style vertical signs that are nearly 4 stories high. Today, the Golden Gate Theatre is still a premier venue for travelling Broadway shows and a visual journey into San Francisco’s gilded past. Renovation began in August 2017 to the plans of architectural firm ELS Architects who returned the theatre to its original 1922 opening condition. It reopened on September 11, 2018 with “On Your Feet”.

when Krakatoa-East of Java opened at the Warner in Manhattan and the Cinerama Dome in L.A. it was advertised as being “in Cinerama”. now at this theater it was advertised as being in Super 70mm. to which my question and it pertains to the rather nice souvenir program sold in the lobby of the Warner. the first two pages of the program talks up the new Super Cinerama process. but if the film wasn’t presented “in Cinerama” at this theater did they sell as souvenir program?

Photos of souvenir program for 2001 added to Photos.

Which souvenir program is that? Mine has the original pre-opening art work. Was this a later issue?

It is a soft cover program and pretty sure I bought it at this theatre in 1968. If you saw 2001 in NYC it opened 2+ months before SF – and may have had a different program.

did the original roadshow cut of 2001 ever play this theater?

also I saw the film at the Loews Capitol in NYC and the program they were sell was the same as the one on pg.1 of the photo section.

Hi bigjoe59….When you say the original roadshow cut do you mean the cut that was shown at the World Premier in DC and the NY opening the next day? If so, I doubt it. I thought I read on this site that it was trimmed after the NY opening. The opening here was a little over 2 months later.

I find it odd that 2001’s roadshow engagement “in Cinerama” at this theater would have sold a different souvenir program then the one sold at the Loews Capitol in Manhattan.

bigjoe59….If you have the same program that I posted on the photo page from the Loew’s Capitol run perhaps vindanpar can elaborate on the one he has with “original pre opening artwork”. Vindanpar….can you post some photos of it on the Loew’s Capitol page?

I would likewise am interested in what souvenir program vindanpar has for 2001. the program you posted on pg.1 of the photo section for this theater is the same one I bought at the Loews Capitol approx. 2 weeks after the film opened.

for years Market St. was full of theaters that were
1st run venues. to which when was the last time a
Market St. theater held the 1st run of a big studio film?