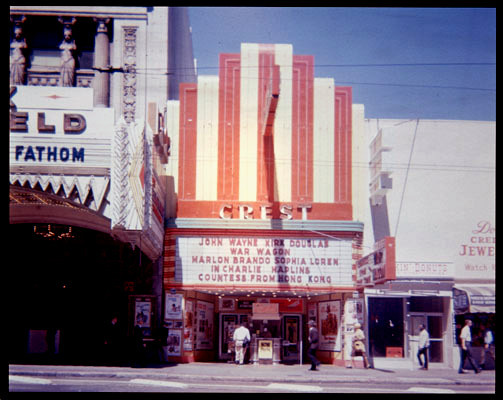 Opened in 1909 as the Lesser Nickelodeon. Since 1994 it’s the Crazy Horse, a "Gentleman’s Club" featuring live lap dancers.

So what happened in between? First of all, around 1910, a young man by the name of Sid Grauman took it over and renamed it Grauman’s Theatre. Two years later, Sid opened up the much bigger and better Imperial Theatre up the street, and his former haunts became known as the Maio Biograph.

In 1922 the magnificent Warfield Theatre was built next door, and after a couple years, it was time for another name change, this time to the Circle Theatre.

On October 12, 1932, for some reason or other, it was renamed New Circle Theatre; on December 14, 1939, another name change, this one for a reason: the Newsreel. The Telenews had just opened down the street that September, and was doing very well. The war had already broken out in Europe, there was plenty of news to go around, so why not give it a whirl!

By the end of World War II, the Newsreel game had dried up, but the name stayed on, at least for a while. Then, in 1949, Fox West Coast Theatres took it over and renamed it the Cinema, ostensibly as a moveover house to provide a little longer Market Street run for their first run features that could no longer sustain the high overhead of their larger theatres.

This simply didn’t work out, and soon it was back to the same old grind. On July 23, 1958, the name was officially changed to the Crest Theatre, and the policy was no more nor less than about a half dozen other theaters up and down Market Street, three features for fifty cents.

New management took over on June 28, 1978 and renamed it the Egyptian Theatre, and then on November 18, 1981 the Electric Theatre.

In February 1994, the Electric closed its doors for the last time and it seemed to be all over. But there was life, a lot of life, in the old girl yet. On July 26, 1994 the lights went on again in a big way as it returned to life as the Crazy Horse Strip Club, aka Crazy Horse Theatre, featuring live lap dancers! It’s still going strong. That’s show biz, but only in San Francisco!

Is that the Warfield next to the Crest in the picture directly above? It’s the only theater in SF that ends in “ELD”.

That is, in fact, the Warfield.

Have often wondered why Hollywood never filmed a biopic about the colorful life of legendary showman Sid Grauman.
Rumor says that during the Klondike Gold Rush, Sid Grauman ran a highly successful brothel in Dawson City, Alaska. When Sid heard that flickers were attracting hordes of ticket buyers he converted the downstairs saloon into a daylight nickelodeon, while still maintaining his profitable upstairs cat house. Eventually the nickel and dime cinema began to bring in almost as much loot as did his soiled doves. By Autumn of 1908 gold became tapped out and Dawson City was floundering, it was then that Grauman absconded with the funds of his fancy ladies leaving the girls flat broke to face an oncoming harsh winter alone and broke.
Sid moved to San Francisco and opened this profitable, no frills movie house. The rest of the story can be found amoungst these many pages of CT …

Here is an approximate timeline regarding the various incarnations of this building. Some of the akas are missing from the caption.

Crest should be added as an AKA.

1973 photo as the Crest added courtesy of Michael Thomas Angelo‎.

Opened as Newsreel on December 15th, 1939. The Telenews stepped up their newspaper ad budget when this opened.

Listings for Cinema started on December 3rd, 1949. no special ad.