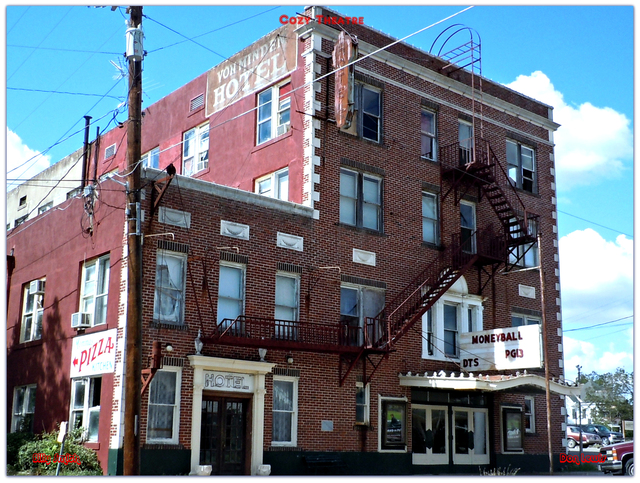 The Cosy Theatre opened on November 30, 1927 with Clara Bow in “Rough House Rosie”. The Cozy Theatre is located in the historic Von Minden Hotel in Schulenburg. It was designed by architect Ernest L. Shult. It had closed by February 2017.

Halloween is right around the corner:
http://tinyurl.com/6oy9ra

If you visit, don’t miss the fabulous Snack Bar and Arcade

This theatre is closed and the building is for sale.

The original Cozy Theatre was opened by Gerhard von Minden and Irwin W. Speckels on August 4, 1923 with Mildred Harris Chaplin in “Polly of Storm Country.” The pair had operated the Cozy in nearby La Grange since 1917 when von Minden moved to the area.

Von Minden started the new four-story, von Minden Hotel Building in 1924 and finally opened both the New Cozy Theatre in 1927 and the von Minden Hotel in 1928. The New Cozy Theatre opened on November 30, 1927 with Clara Bow in “Rough House Rosie.” An opening speech by Texas Senator Gus Russek launched the evening and Babe Schindler’s Orchestra provided the evening’s musical numbers. The Hotel launched May 22, 1928 – the structure apparently taking longer than expected to complete. The Cozy converted to sound on its way to a 90-year legacy.